Review: "The Killing of John Lennon" 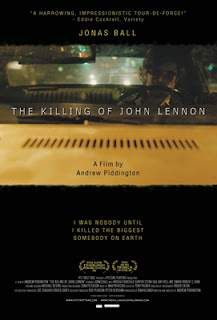 Coming away from Andrew Piddington's The Killing of John Lennon, I have definite mixed feelings. On the one hand, we have a hit-and-miss film filled with film school gimmicks; self-consciously styled evocations of insanity that are really nothing new.

On the other hand, we have a film that is unmistakably the work of a growing filmmaker coming into his own, but not quite there yet.

The Killing of John Lennon dramatizes Mark David Chapman's plot and eventual execution of the murder of John Lennon, and attempts to dive into Chapman's head to see what exactly made him tick and drove him to murder.

The film succeeds mainly because of newcomer Jonas Ball's intense performance, who brings a disturbingly bizarre life to Chapman in all of his tortured madness. But Piddington seems determined to constantly remind us how crazy he is, even though we really don't need reminding.

It also attempts to portray Chapman as a product of a celebrity obsessed culture, which is a legitimate angle of course, but it never quite gets off the ground. Piddington has obvious talent as a filmmaker, but here he is still clinging to film school techniques to the point that he almost seems boxed in by them. If he were to let go of those crutches then The Killing of John Lennon may have soared, instead of being merely intermittently interesting.

There are some truly compelling moments here, especially near the end. But it's never really anything more than Taxi Driver-lite. It's compulsively watchable however, it carries that strange fascination of madness, and actually does a pretty good job of decoding Chapman as much as a man like Chapman can be decoded. In other words it leaves plenty of questions, but not in a bad way.

But it's hard to swallow, especially with so many glaring factual errors (the presence of huge Wicked and Hairspray billboards in Times Square are among the more obvious anachronisms). Things such as this can be overlooked sometimes when it comes to films of this size, but there are just too many to be ignored. Better care could have been taken to avoid this problem.

The Killing of John Lennon feels like a prototype for a much better movie - a not bad display of student skill that will eventually be revisited and expanded upon to make something more fleshed out and filling, and not quite so stiff and detached. For a movie about such a passionate man (no matter how displaced that passion), the film seems oddly listless. The film could have used more of that mad fervor to really drive its message home. As it stands, it's just somewhere above mediocre, a shadow of a film that might have been.

Yosiempre!!! said…
i had read your coment about the spanish movie too, "el orfanato". i have seen this one and it´s very good for be spanish ( owr cinema is really bad). But it has not chosen for the oscars, it should be but maybe it´s a very exploting theme. Other good movie is The Others like u put in your post. Alejandro is a good director, but his last movie (the sea inside) ia a "shit"I can´t tell u a lot of good spanish movies. Maybe "tesis" or "abre los ojos"...And do u know Almodovar?? What do u think about his movies?
12:50 PM

Matthew Lucas said…
I'm a big fan of Almodovar. Here is a brief idea of my opinion of him: http://fromthefrontrow.blogspot.com/2007/12/i-love-christmas.html
5:30 PM