I was just flipping around the channels when I came across one of my favorite films, and all-time favorite musical, Busby Berkeley's Footlight Parade (Lloyd Bacon, 1933), on Turner Classic Movies. 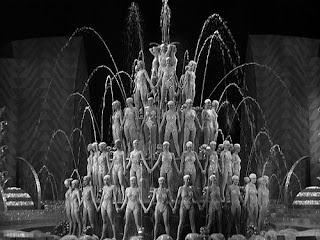 I have the film on DVD as part of the excellent Busby Berkeley Collection, but I just had to stop and watch. This is one of those films that never gets old. Berkeley's breathtaking choreography, Bacon's snappy direction, Harry Warren and Sammy Fain's unforgettable songs, James Cagney - it's just perfect.

Studios cranked out hundred of musicals like this during the depression to try and cheer people up and help them escape, but nobody did them like Berkeley - and this lightning paced romp about a dance company trying to put on three huge production numbers to top the competition, keeps the rapid-fire dialogue and antics coming at a break neck pace, and never fails to put a smile on my face.
Email Post