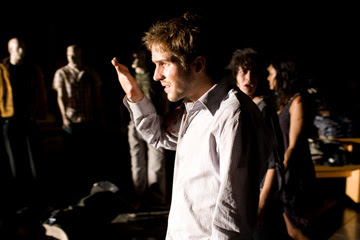 My review of Cloverfield will not run in The Dispatch until next Thursday, because my deadline is Tuesday at noon and I didn't see the film until Tuesday evening. But since it's officially 1/18 and I'm safe from the embargo, here is a preview:

"Cloverfield" is something close to revolutionary - a landmark monster movie that is every bit as good as Joon-ho Bong's "The Host," and approaching the level of the original "Gojira" (the 1954 Japanese version, not the 1956 American re-tooling starring Raymond Burr). It takes a well-worn formula (big monster destroys New York), and turns it into something that feels wholly original.

Shot entirely on a handheld camcorder, the film takes on a terrifying immediacy that feels like a mash-up of "Godzilla" and "The Blair Witch Project" - only better. This is a monster movie for a post-9/11 world, that plays on our deepest fears through haunting visual references that recall a day in New York in September 2001 that still brings pain seven years later. Buildings crumble, streets fill with ash, bloodied victims stagger dazed and ghostly, covered in head to toe in gray dust, paper flutters from the sky.

It's all chillingly real, and the visual effects are stunning, even if we never get a good look at anything that's going on. The camera purposely stays on the periphery, missing events other films would have been right in the middle of. But its true to life - you can't see all the action all the time. It has a very disorienting effect that is really frightening - something at which "Cloverfield" is devastatingly effective, and it wisely stays more focused on the core group of survivors than on the creature itself. We never know any more about what's going on than they do, and our questions are never answered. Add that to the mostly improvised dialogue and the naturalistic performances of the talented young cast, and you have an honest-to-god scary documentation of the total annihilation of New York City.

The full review will run in The Dispatch on the 24th.
Email Post