I ran across this over at Cinematical, which led me to the Variety article on the documentary Jihad for Love, chronicling the lives of gay Muslims, which has just been picked up by First Run Features. 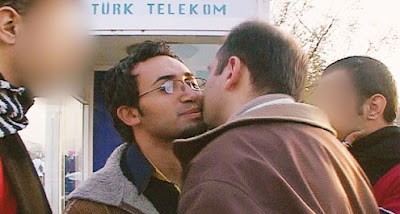 The film is directed by Parvez Sharma, who also directed Trembling Before G-d, about the lives of gay Jews.

This sounds like a fascinating film, one that is potentially incendiary. Parts of it were filmed in secret because local governments refused to approve it. We need more movies like this - For the Bible Tells Me So (which was also distributed by First Run Features) was an excellent look at the lives of conservative Christian families with gay children, and we need more movies to keep smashing down closet doors until there is no longer any need for a closet at all.

My only fear is that films like this ultimately end up preaching to the choir - the majority of attendees at the screening I attended at the North Carolina School of the Arts were either homosexual or supporters - I think those who oppose it would rather stick their heads in the sand and stay home.

The distributers are looking at a potential May release date...I'm really looking forward to this one.
Email Post