"I am a false prophet, God is a superstition!" 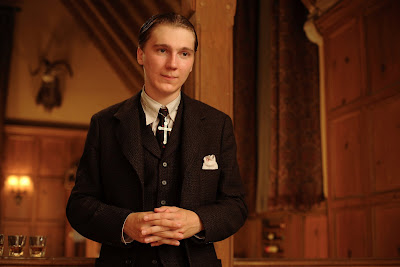 Normally, I don't like to give religious fundamentalists any press, but I just had to share this little tidbit from one of my favorite nutcases, Ted Baehr, editor of the Christian movie review website, MovieGuide, about There Will Be Blood:

The realistic, gritty atmosphere created by screenwriter/director Paul Thomas Anderson and actor Daniel Day-Lewis as Daniel Plainview is tremendous. It is practically ruined, however, by Anderson’s evil caricature of Eli, the revenge-minded preacher, and the over-the-top, unrealistic performance of Paul Dano as Eli. In fact, THERE WILL BE BLOOD is one of the most mean-spirited, anti-Christian, superficial, and poorly played portrayals of religion ever created in movie history. God knows there have been plenty of insincere, sinful leaders in the Christian church, but there have also been many good Christians who have exposed and opposed such false leaders. The short length of most feature films often require stereotypes, even negative ones, to tell a good story, but when they are so mean-spirited, superficial and poorly played as this one is, they appeal only to narrow-minded bigots with an ax to grind, whose mental faculties and hearts have been poisoned by their sinful misanthropic prejudice.

Now, I don't know why anyone gives this man any credibility. He obviously knows nothing about acting if he is so ignorant as to call Paul Dano's explosive performance "poorly played." He just didn't like the character.

I also didn't see the film as being anti-Christian, and neither did my generally conservative Christian mother, who called the film "gripping" and was still talking about it hours later, and said that while the portrayal of Eli made her cringe, she knew that there were people out there like that - as even Baehr admits.

I also defy his statement that Eli is a "caricature." I found Dano's portrayal remarkably layered - Eli is not "evil," just as Daniel is not "evil." They are both men consumed by greed whose intentions may start off as good, but end up doing evil things. That does not make either one of them inherently evil. If you miss out on subtleties like that then you miss out on the whole point of the film.

His final statement shows just what a hypocrite he is, as he manages to turn supporters of this film into anti-Christian caricatures. You know what they say about assuming...

Maybe Eli just hit too close to home for him.

And he apparently thinks that There Will Be Blood is worse than Aliens vs. Predator: Requiem.

But then again, this is the same man who got upset when the Golden Globes didn't nominate popular films like Transformers and Spider-Man 3, so as to reflect the tastes of the American ticket buying public, saying "the Golden Globes are not golden at the with ticket buyers. They appear more brown, like something you wouldn’t want to step in" - this coming from the same man who gave Alvin and the Chipmunks four stars. And he wonders why no one takes him seriously.

Anonymous said…
What a clown. Just because Daniel Plainview is anti-religious, it doesn't mean PTA is.

If anything, the film avoided making blatant political or religious statements.
2:18 AM

Matthew Lucas said…
Yep, apparently he can't make the distinction between the views of the characters and the views of the director. PTA was never condoning the actions of Daniel Plainview.
3:53 PM

Cahier said…
I don't think it's so far from reality even if it doesn't mean that he is an archetype.
10:57 AM

Anonymous said…
Although Eli may not be inherently or intentionally evil, there is no doubt that Daniel Plainview is an evil, evil man. If you can defend his actions as merely misguided, then I think that very few evil men have existed. Even the wicked have moments of goodness, but that does not excuse them from being "evil".
1:25 AM

Anonymous said…
You are all fucking faggots and you need to realize that just because you believe god doesnt mean everyone else does and need to get a grop on reality.
9:33 AM

Anonymous said…
This quote is a personal opinion. There is nothing wrong with believing God is a superstition. It's a powerful statement and makes you think hard about the topic. Both characters reach a line of evil and in fact show the two type of evils most responsible for world problems. Corrupt business man and corrupt religion's. That's not saying all businesses and religions are corrupt.
6:47 PM