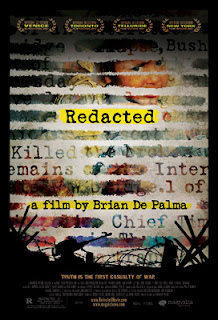 I finally got a look at Brian De Palma's much maligned Redacted, and I was honestly surprised. To listen to many, Redacted was one of the worst movies of the year, an embarrassing partisan failure. But that is not the film I saw. It was flawed, yes, but spectacularly so. In fact I think it is one of the essential films to come from the Iraq war.

Shot from the perspective of the troops using hand-held camcorders, Redacted tells a fact-based, fictional story about a group of American soldiers who brutally rape and murder a 15 year old girl, and then slaughter her entire family.

This technique, interspersed with faux-news reports and insurgent internet videos (and then later with real pictures of dead Iraqi civilians), makes for an unsettling viewing experience, not unlike Cloverfield, in which the viewer is forced into the perspective of the soldiers - in other words, it feels real.

The main problem here though is that it paints with extremely broad strokes. Every American soldier is not a monster, just as every American soldier is not a saint. By leaning heavily toward the former, De Palma is just as guilty of whitewashing as the right-wing blowhards who insist that America is right no matter what, and anyone who says differently is unpatriotic. Surely there is a middle ground to be found here. 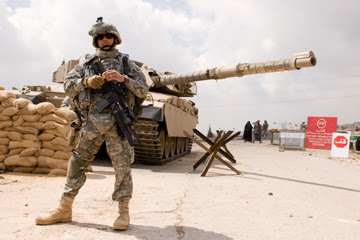 But its hard to deny that Redacted is a film of great passion. It feels like a knee-jerk reaction made in great anger, lashing out a conflict that is wrong and unjust, where innocents are killed everyday in the name of a mission few can even name. Movies about the Iraq war could use more of this righteous anger and passion to make a difference, instead of dry moralizing and beating in tired points. De Palma has something to say, and isn't afraid to say it in the most incendiary, in-your-face style possible, and you have to admire it.

Sure it's an imperfect film, but it's far too compelling to ignore. De Palma is on fire, and his latest film is far more successful in its aims than his last film, the miserable The Black Dahlia, even if it misses the target just as much as it hits it, it's never too far off the mark. 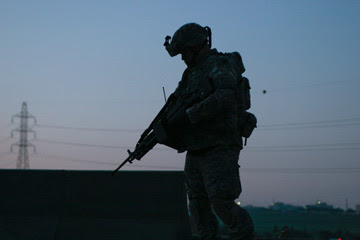 This is provocative, deeply personal filmmaking that, like it or not, is undeniably audacious. If it had made more than $65,388 at the box office during its extremely limited release (it never played in more than 15 theaters), then this might have been remembered as one of the most interesting films to spring from the current Iraq conflict. Maybe film historians will recognize its power and ingenuity in the years to come, but right now I think it's just too much for most people to handle.

It refuses to be pigeon-holed (Iraqis are seen in both positive and horrific lights), and is a shockingly brave piece of social protest. If only it had used more of the complexity it demonstrated in its portrayal of the Iraqis in its views of the Americans then perhaps it would have been better received. As it stands, Redacted is a bold, ambitious, and ultimately flawed portrait of an equally bold, ambitious, and flawed conflict.