"Killer of Sheep" on TCM

Charles Burnett's 1977 African-American cinema landmark, Killer of Sheep, which was finally given a theatrical release just last year, will make its television debut on Turner Classic Movies on Monday, January 21. 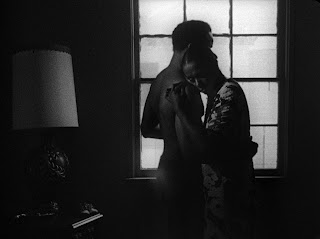 With its rough, unpolished style, slightly muffled sound and grainy black-and-white cinematography, “Killer of Sheep” becomes a kind of historical document, a snapshot of a specific place and time that honestly could have taken place anywhere at any time. And in doing so, it opens up a kind of window to ourselves. This is life, in all of its ugly messiness and quiet glory. These are the small moments, the ones most movies never show. This is life as it is actually lived. How many movies ever dare to show life at its most mundane?

Yet those are the moments that Burnett embraces, as Stan relishes the warmth of a coffee cup against his face, children playing games on the street, commonplace thievery, getting a flat tire or just loading up a pickup truck, all intercut with the never-ending slaughter of the sheep. And even with a cast of unprofessional actors, “Killer of Sheep” is always vibrantly alive and unflinchingly real.

If you didn't get the chance to see this gem, which was named a national treasure by the Library of Congress, while it was in theaters (very few people did), I highly recommend tuning into TCM on January 21st, at 8:00 PM EST, or 12:30 AM EST.
Email Post