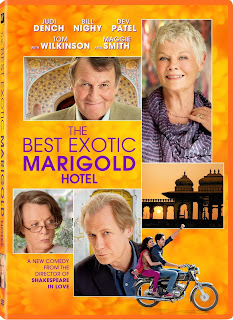 One of this summer's most prominent art house successes, John Madden's The Best Exotic Marigold Hotel is one of those pleasant, wholly inoffensive specialty films that its hard to fault for being what it is.

You could certainly nitpick it, of course, and I guess that's my job as a critic, even if deep down I really like the film.. It's a tad overlong, it tends to take character and narrative shortcuts when its convenient, and spends a bit too much time trying everything up in a neat little bow, even when the character motivations don't always add up.

That being said, it's also completely charming, and the wonderful cast of British actors keep the film afloat. It's hard to resist any film starring Judi Dench, Maggie Smith, Tom Wilkinson, and Bill Nighy, no matter what the film around them is like.

In this case, the film around them deals with a group of elderly Britons, all from disparate backgrounds, who decide to retire to India to a retirement home known as the Best Exotic Marigold Hotel. When they arrive, however, they discover a run down old hotel run by an eager but inept young man (Slumdog Millionaire's Dev Patel). Each has their own story and each has their own destiny. Dench is a widow looking for a new lease on life by writing a blog about her travels. Smith is a racist old bat with a Cockney accent who needs a hip replacement. Nighy is looking for adventure while his cranky wife (Downton Abbey's Penelope Wilton) merely wants familiarity. And Wilkinson is a gay retired judge who has returned to India to find his former lover, after they were separated years before when the discovery of their relationship brought shame upon their families.

Taken on their own, each story is compelling in its own right especially Wilkinson's, which deserves much more screen time than it receives. The story of Patel and his girlfriend, however, seems more like a distraction, and the need for a younger romance to anchor the story. It comes off as unnecessary, and while in the end it my help to unite everyone in the hotel, it just doesn't carry the same weight. Despite a lack of development time, the film boasts fine performances and an overall beguiling atmosphere that makes it thoroughly enjoyable. If only it had embraced the substance of its story (most importantly its themes of "outsourcing retirement") rather than merely glossing over it, The Best Exotic Marigold Hotel might have been something very special indeed. Instead, it's merely a mildly entertaining time-passer that will mostly please fans of the actors, who will no doubt find plenty to like behind its charming facade.