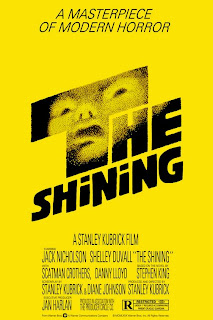 No list of the greatest horror films of all time is complete without Stanley Kubrick's The Shining. While it was the only pure horror film that Kubrick ever made, nearly all of his films contained some element of it. Few directors have ever been so adept at creating unease as Kubrick, and from 2001 to A Clockwork Orange, Kubrick could unnerve like no other.

Based on Stephen King's novel (and it remains the greatest King adaptation), The Shining follows Jack Torrence (Jack Nicholson), a writer who agrees to be the caretaker of a massive mountain hotel during the winter months while he writes his new book. What follows is a slow descent into madness that is one of the most harrowing in cinema history. Is the hotel haunted? Or has Jack lost his mind? Or both? It's an utterly terrifying experience, and remains so to this day. It is one of the few great horror films that is also a great film, period. Kubrick had an uncanny habit of making masterpieces, and The Shining is another shining example. The scene in which we finally realize that Jack has completely snapped, with the pages of his novel filled only with the immortal line "all work and no play make Jack a dull boy" is a perfect demonstration of Kubrick's cinematic mastery.

It's impossible to watch this film and not feel something - terror, revulsion, shock, unease. It's a true roller-coaster ride, and a haunted house movie that never once feels hokey or false. The Shining is a veritable textbook on how to do horror right.
Email Post