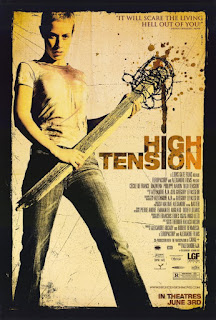 In 2005, the world was introduced to French horror maestro Alexandre Aja with a nasty little piece of work called High Tension. Aja would go on to direct the excellent remake of The Hills Have Eyes, as well as the gleefully over the top remake of Piranha. But while Aja may have become succesful (and recognizable) through his high profile remakes, it was this French horror film that put him on the map, and with good reason.

High Tension remains his best work, with a major caveat. It's the story of a girl who witnesses the family of the friend she is staying with brutally murdered by a maniac in the remote French countryside. Bloodied and terrified, she stows away in the back of his vehicle to try and find help, and the bloodbath continues everywhere she goes.

The film is aptly named - it's an intense experience, constantly building to a fever pitch that never seems to break. But then it all goes downhill. High Tension goes from perhaps the finest horror film of the decade to a huge mess in one of the most frustrating and nonsensical twist endings I have ever seen. Everything leading up to the end is absolutely top notch horror. But those last 15 minutes really kill it. Ignoring the ending and taking the film on face value (without the ridiculous twist), what we have here is awakening of a brave and fresh voice in horror. Aja is perhaps one of the most wicked and cruel horror directors working today, constantly dreaming up ever more gruesome and horrifying deaths for his characters. High Tension is filled with ghastly and disturbing images (at one point the killer rapes a severed head), and as such is only one of the handful of films to have ever received an NC-17 rating from the MPAA (for strong graphic violence), a rare occurrence for a film with hardly any sexual content. But unlike other films to have come from the "splat pack" of modern horror directors such as Saw and Hostel, High Tension doesn't just rely on blood and guts to make the audience uncomfortable. Aja has the raw talent to back up his thirst for gore, and as a result High Tension is a lean, mean, scaring machine - a true work of terror and suspense that unfortunately succumbs to a completely ludicrous twist ending.
Email Post