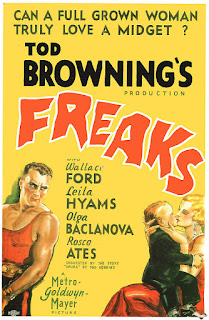 "Can a full grown woman truly love a midget?" Asks the original advertising art for Tod Browning's brazenly un-PC 1932 shocker, Freaks. Made just one year after his most famous film, Dracula, Browning's Freaks was banned in several countries for upwards of 30 years after its initial release, and effectively ended the director's career.

His use of actual circus "freaks" remains controversial to this day, and indeed Browning toes the line of exploitation by using people with actual medical problems as a source of horror. Ultimately, however, the "freaks" turn out to be the heroes. It is the so-called "normal" people who are the real monsters, and therein lies the point of this gleefully subversive film. The tale of a trapeze artist whose affair with a midget is actually just cover to get his money while she dallies around with one of the circus' strong men, Freaks is a revenge movie disguised as a horror film. By the time the "freaks" discover what this woman really thinks about them, wheels are set in motion, and the privelege of the "normal" people is about to come crashing down. It's an interesting allegory, still relevant today, as Browning contrasts the camaraderie of those society has forgotten against the cold, unfeeling arrogance of the privileged at the top of the food chain. Browning slyly asks us "who are the real freaks here?"

It's a shame that Freaks turned out to be Browning's last major film. He made a few piddly B-pictures afterward, but his career was never the same. Freaks destroyed it, but is widely (and rightly) regarded today as his masterpiece. Even though far fewer have seen it than Dracula, it has nevertheless worked its way into the popular consciousness with its immortal chant of "one of us!" which has been referenced in films as disparate as Bernado Bertolucci's The Dreamers, I, Robot, John Cameron Mitchell's Hedwig and the Angry Inch, and Spy Kids. It's one of the greatest, and most unfairly overlooked, horror films in history.
Email Post