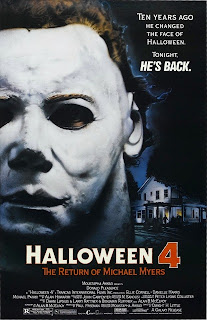 Released 10 years after John Carpenter's original Halloween changed the face of modern horror as we know it, Halloween IV had the task of re-establishing the Michael Myers narrative after the unfairly maligned Halloween III: Season of the Witch had abandoned the original concept completely. This was the point at which Carpenter exited the franchise for good, but the result, surprisingly enough, is perhaps the greatest slasher movie sequel ever made.

It's not exactly a very competitive field, certainly. The sequels to Halloween, A Nightmare on Elm Street, and Friday the 13th are a mixed bag at best (although some of the Friday sequels are a marked improvement over the lazy and uninspired original). But there's just something about this fourth Halloween outing that sets it apart from the pack.

Set 10 years after the original, the film centers around Jamie Lloyd, the young daughter of Laurie Strode, who was killed in a car crash several years before (a plot point that would later be totally ignored by a series for which continuity was never a strong point). Michael Myers, now a patient at a mental institution once again, escapes upon learning of the little girl's existence, and sets off to finish eliminating every member of his family. He is pursued once more by Donald Pleasance's ever more crazed Dr. Loomis, the Captain Ahab to Myers' Mody Dick. It sounds like more of the same, and in some ways it is, but by casting a young child in the lead role, it becomes much more about childhood fears of the boogeyman, a theme touched on the original but probed with greater depth here. The searing finale, which sets up young Jamie as Michael's heir apparent, is swept under the rug by its rather bland successor, Halloween V: The Revenge of Michael Myers, but for one shining moment, the series stepped up with something brave, daring, and new that set it apart from the competition once again. It also contains a chilling opening sequence which perfectly captures the spirit of Halloween in a way few other films ever have. It's a surprising oasis of quality in a field crowded with posers and banal retreads. Halloween IV got it right. If only other slasher sequels had been this good.
Email Post