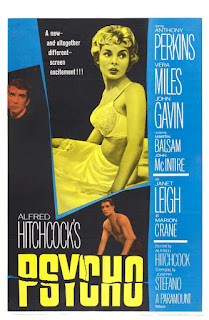 There are few horror films as legendary, or still as thoroughly effective, as Alfred Hitchcock's Psycho. Still every bit as haunting and unnerving as it was 52 years ago, Psycho is a master class in suspense. Hitchcock practically wrote the book on how to effectively keep an audience on the edge of its seat, and after Psycho, the movies were never the same again.

The story remains timeless. A woman on the run, Marion Crane, stops at the small, run down Bates Motel, after stealing a large sum of money from her employer. There she meets the lonely innkeeper, Norman Bates, who she befriends. But their friendship raises the ire of his overbearing mother, who murders her in the shower in one of cinema's most memorable and dazzlingly edited sequences. It isn't long, however, before her sister hires a private detective to get to the bottom of her disappearance, but their search will lead to a shocking discovery that culminates in one of the greatest twist endings of all time.

Hitchcock loved to toy with expectations, and here he upended them completely by killing off the "star" of the film early on. It was a bold move, and it payed off. We soon begin to realize that the real star of the film wasn't Marion at all, but Norman, and that the strange little innkeeper is hiding much more than we suspected. In true Hitchcock form, the layers are slowly peeled back (complete with sexual and psychological issues), details revealed bit by bit, but he never shows his full hand until the very end. The infamous shower scene was certainly shocking by the standards of 1960, and remains so today. Hitchcock uses editing techniques gleaned from the Soviets (Eisenstein would have been proud) to craft one of the most visceral and unforgettable moments in cinema history, and has made generations afraid to go in the shower. In the battle for horror movie dominance, it is quite possible that Psycho tops them all.
Email Post