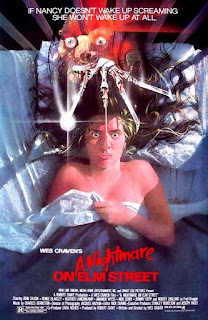 By 1984 the slasher genre was in full swing. Michael Myers had begat Jason, and a whole slew of cheap, Halloween knock offs that never came close to John Carpenter's classic achievement.

Then along came Wes Craven, who had cut his teeth on much nastier, less main stream horror films like The Last House on the Left and The Hills Have Eyes, and gave the world Freddy Krueger in A Nightmare on Elm Street, giving the already tired genre a much needed shot of adrenaline. More than just a man in a mask chasing co-eds, Freddy Krueger was a wicked, knife-fingered child molester who haunted the dreams of children. And in your dreams, there is nowhere to run. It was just the twist the genre needed, and Robert Englund's leering Freddy is one of the greatest villains of modern horror.

A Nightmare on Elm Street also spawned perhaps the strongest of the slasher series. While Halloween will always and forever be my favorite horror franchise, the Nightmare series easily has the best continuity and the most sustained quality. The only real duds are the bizarre, unintentionally homoerotic Nightmare on Elm Street 2: Freddy's Revenge and the utterly abysmal Freddy's Dead: The Final Nightmare. Otherwise, the filmmakers who carried Craven's torch continued the story well without ignoring what came before it the way the Halloween series did. While Freddy eventually evolved into more of a murderous jokester, in Craven's original Nightmare he was terrifying indeed, and continues to haunt the nightmares of a generation.
Email Post