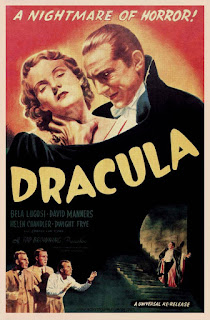 While not the first film to be based on Bram Stoker's novel (F.W. Murnau's Nosferatu beat it by about 9 years), Tod Browning's Dracula was the first one to be authorized by the Stoker estate, and has become the most enduring and popular incarnation of the legendary tale.

No one inhabited the role of Count Dracula better than Bela Lugosi. His curious cadences and piercing eyes became synonymous with what it meant to be a vampire. The role is so recognized by his performance that Lugosi was actually buried in his Dracula cape.

Of all the Universal monster films, Dracula is by far my favorite. There's something so distinctly chilling about its gothic production design and Lugosi's seductive performance that it's impossible to resist. And while I enjoy Philip Glass' recent score on its own merits, I prefer the film in its original form, without music. There's something almost more haunting, more dangerous about it when surrounded by deadly silence.

While Nosferatu is, perhaps, the superior film (Dracula sort of ends abruptly), no other Stoker adaptation has become so legendary, and no performer has embodied the role with such singular power. It's a horror classic that truly deserves its status, and is an essential piece of any horror collection.
Email Post