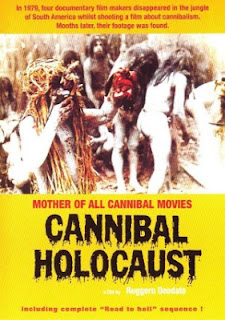 It has become a time honored marketing ploy for a film to label itself controversial. Few of these films are ever actually as controversial as they like to think they are, and fewer still have the right to claim to be the the "most controversial film ever made." But none of those films got their directors arrested because the death scenes were so graphically realistic that authorities thought he had actually murdered them for the purpose of the film. That distinction belongs to Ruggero Deodato's infamous Cannibal Holocaust, which may very well be the most controversial film of all time.

Serving as the prototype for the "found footage" genre as we know it today, Cannibal Holocaust is mostly made up of footage shot by a group of documentary filmmakers who went missing in the Amazon after going to study a native tribe. We are meant to suspect that the natives killed and ate them, which is true, of course. But as the film unfolds the horrors that the white visitors brought down upon them becomes clear, brutally raping their women (with spiked rocks), burning them alive and having sex on their ashes, and we are left to wonder who the true monsters really were.

Much like The Blair Witch Project would 18 years later, the principle actors went into a sort of hiding after the film was released in order to give it more of a sense of reality, but after Deodato was arrested, he had to produce them in order to prove that they had not, in fact, been killed on film. Still, 32 years after its initial release, Cannibal Holocaust remains perhaps the single most brutal, graphic, and nauseating film ever produced, controversial not only for its human violence but for the animals that were actually killed on screen in agonizing ways. One has to wonder what value such a film has, with its nearly relentless onslaught of shocking, depraved, and degrading violence. But unlike films such as The Human Centipede II, which felt like it was being disgusting just for the sake of being shocking, Cannibal Holocaust feels different, because it feels so real. It is not a perfect film by any means, but it's no mere exploitation picture either. It actually conjures up a legitimate feeling of tension and dread, creating such a realistic atmosphere that we actually believe what we are seeing is real. The "documentary" footage is so raw, so gritty, that it's easy to see why authorities believed in it to the point they thought they were witnessing actual murder. As such, that makes Cannibal Holocaust one of the most terrifying cinematic experiences it is possible to have. For those who can stomach it, it's an experience like no other, one so visceral and disturbing that most will probably never want to have it again. Everyone else should give it a wide berth. Those that make it all the way through will be part of a proud few who have experienced something in film history that is both influential still today, and unlike anything else that has ever been seen, or is likely to be seen again.
Email Post