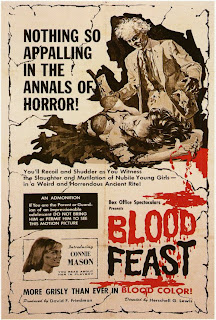 Blood Feast may be one of the worst films of all time, but it's also one of the most influential. It has the distinction of being the first gore film, a genre dreamed up by one of cinema's supreme hacks, Herschell Gordon Lewis. A huckster of the first degree, Lewis was willing to do just about anything to get butts in seats. Cutting his teeth on "nudie cutie" exploitation films in the early 1960s, Lewis exploited the relaxing film standards on "educational nudity" by taking place in non-sexual nudist camps in order to titillate an audience unused to bare breasts on screen. By 1963, Lewis was tired of the nudie cuties, and ready to find something else to exploit, and he landed on the idea of blood and guts.

Blood Feast is a bizarre piece of work indeed. A strange tale of an Egyptian madman named Fuad Rameses (Mal Arnold, in a truly off-the-rocker performance he believed was brilliant) sacrificing nubile young women to in ritualistic sacrifices to Egyptian gods, the film is chock full of over the top gore effects and clearly plastic dismembered body parts. The sound is shoddy, the acting laughable, and the cinematic technique is poor at best (Lewis' mise-en-scene is downright painful). But no one believed in what he was doing more than Lewis, and as such he became a kind of Ed Wood by way of P.T. Barnum.

Lewis would come to be known as the "Godfather of Gore" (a title he shares with Lucio Fulci, who, let's face it, he's not even in the same league with), and would go on to direct other, similar films such as One Thousand Maniacs and Color Me Blood Red (which collectively became known as the Blood Trilogy). None could match the singular weirdness of Blood Feast. There's just nothing else like it. No one will ever mistake it for a great film, but with every Saw and Hostel we are still feeling its influence today. Herschell Gordon Lewis may have been a smut peddler, but he was a gleeful smut peddler, and this, his "masterpiece," is a work that simply must be experienced.
Email Post