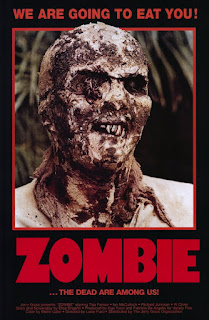 With the resurgence in popularity of zombies over the last decade or so, it is somewhat surprising that the films of Lucio Fulci have not been revisited in the same way as George Romero's have. Whereas Romero is, in some ways, a one trick pony, Fulci was arguably more of an artist. He wasn't always a successful one, but his films carried a kind of personal passion that is somewhat lacking in Romero's later work.

1979's Zombie (or Zombi 2, as it was known in Italy, where it was marketed as a sequel to Romero's Dawn of the Dead, which was known as Zombi in Italy) is perhaps the ultimate zombie movie. Considered by many to be Fulci's masterpiece, it is an odd film indeed. Zombie mixes the two zombie subgenres, plague and voodoo, by chronicling an outbreak on a small island where natives fear the experiments going on in a nearby lab. After a boat turns up in New York Harbor carrying an undead passenger, an investigation is launched, with disastrous results.

Fulci's creativity is on full display here (the infamous eye-gouging scene is one of horror's most singularly horrific effects), but the limits of his budget are clear. Fulci reuses several shots during the climactic zombie attack, and the haunting final shot of zombies marching on Manhattan was done on the sly without a permit (as was the opening in New York Harbor). It is almost more frightening, however, because of its low budget aesthetic. The film also contains the best single zombie of all time, whose horrifying visage graces the film's iconic poster with the tagline "we are going to eat you!" It's also the only film you're likely to see in which a zombie fights a shark. And yes, it's a real actor wrestling a real shark. Fulci didn't play around. Parts of it may seem hokey now (the bizarre island music is laughably bad), but when that eerie main theme starts playing (up there with John Carpenter's Halloween theme as some of cinema's scariest music), you know you're in the hands of a horror master. It's one of the most terrifying zombie films ever made.
Email Post