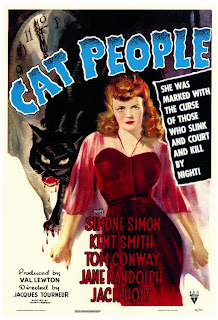 Horror producer Val Lewton could have easily gone down in cinematic history as just another B-movie huckster, as studios handed him sensational titles such as I Walked With a Zombie and Body Snatchers and expected some cheap, throwaway horror films in return.

Instead he gave them compelling psychological and romantic dramas that transcended their B-movie roots and attained something much greater. One of his best was Cat People.

Directed by Jacques Tourneur, Cat People tells the story of Irena (Simone Simon), a Serbian-born artist living in New York, who falls in love with American Oliver (Kent Smith). Things begin to go wrong, however, when Irena begins to believe that she is responsible for a series of deaths linked to a large panther. Is the ancient heritage of witchcraft and cat-worship linked to her people to blame? Or is she slowly going mad?

Beautiful and atmospheric (with a haunting musical score based around a Serbian lullaby), Lewton and Tourneur play their hand close to the chest, reserving the horror elements for just the right moments and keeping the audience guessing to the end. It's first and foremost a love story, and that's what makes Cat People so unique. It takes what could have easily been a silly idea (a woman who may or may not be turning into a cat at night and killing people), and imbues it with a sense of urgency and tragedy that is completely unexpected.