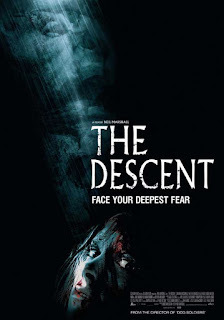 Movies don't really scare me anymore. They just don't. I've seen too many films and become far too jaded for movies to really affect me in that way. But in 2006, a very rare and very special exception to that rule was released in American theaters.

Neil Marshall's The Descent is a rare breed, a great modern horror film that never panders to its audience and has the guts not to overplay its hand too soon. The film tells the story of a group of women who decide to take their mutual friend on a weekend getaway to the Appalachian mountains of North Carolina to go spelunking, after her husband and daughter were killed in a tragic car accident. But instead of a well explored cave, they decide to tackle an unexplored cavern never before seen by human eyes. Or so they thought. As they descend into the darkness, the terrain becomes more and more dangerous, and their options for escape become even more limited. It soon becomes apparent, however, that something is lurking in the darkness. Something deadly and primal, and their carefree vacation becomes a terrifying bloodbath.

What makes The Descent so incredible is that it doesn't introduces the creatures until an hour or so into the movie, instead relying on the inherent clausterphobia of the cave to create a palpable atmosphere of dread. In fact the cave almost becomes its own character, and is in many ways the main villain of the film. It's actually scarier than the monsters that come out of it, and the creatures are pretty scary (and frighteningly believable) on their own. Marshall masterfully ratchets up the tension until its almost unbearable, and then hits us with the hammerblow of the appearance of the creatures, making them all the more shocking.

While the American version features a truncated, less bleak ending, the original British cut is the most widely available on home video and remains the definitive version of the film (even though it's billed as the 'unrated' cut in the US, it merely reinstates the haunting, minute long epilogue that turns the ending upside down). The Descent reaches levels of such primal terror that it shakes its audience to the core. It's the scariest movie of the 2000s, and possibly of the last 20 years.
Email Post