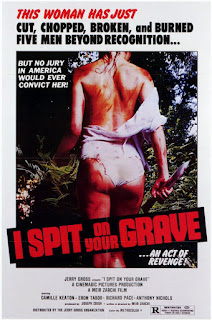 During the 1970s, a strange horror subgenre appeared that perhaps turned stomachs more than any other before - the rape exploitation film. Spurred on, perhaps, by the success of Wes Craven's The Last House on the Left in 1972, a series of knock-offs began to appear (almost all of which, strangely, starred David Hess), including films such as The House on the Edge of the Park and Hitch-Hike.

In 1978, however, a film came along that put them all to shame - Meir Zarchi's infamous I Spit on Your Grave (aka Day of the Woman). No other film (except for perhaps Cannibal Holocaust...more on that one later this month) has portrayed the act of rape with such painful, gruesome realism. In fact the first half of the movie is basically one extended rape sequence that is so graphic and emotionally wrenching that it takes a very strong stomach to watch. While it has often been accused of being degrading and offensive to women, it has also been hailed as a feminist masterpiece. I tend to side with the latter camp (although both sides have a point). What sets the film apart from its exploitation brethren is what it does next. After dragging us through the muck and filth of a truly disgusting rape sequence (which actually included multiple rapes), our heroine comes back for revenge. Soon she is slicing and dicing her way through the flesh of her assailants in the ultimate feminist psychosexual revenge fantasy.

I Spit on Your Grave is a horror film in every sense of the word, because it is one of the most genuinely horrifying films ever made. So much so that it's not a fun movie to watch. How one reacts to it will depend greatly on their own point of view. Is it exploitative? Perhaps. It spends a great deal of time wallowing in the degradation and pain of its heroine. But never once are we asked to sympathize with or cheer on her rapists. Her nudity is not pretty or arousing in anyway. Zarchi treats the subject with the appropriate amount of horror. What we cheer for is her revenge. What makes this such a unique and interesting film is that it actually confronts us with such heinous violence and asks, "is this justified?"

Upon the film's initial release Roger Ebert wrote - "Sick, reprehensible, and contemptible. This movie is an expression of the most diseased and perverted darker human natures." And while the film could certainly be interpreted that way, I think the younger Ebert missed the point. I Spit on Your Grave is not a film about a victim. It's a film about a woman who stood up and said "enough." That is one of the many ways this film went where few other horror films have gone before.
Email Post