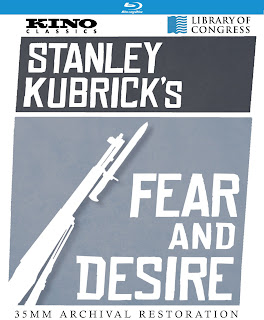 Kino Lorber's blu-ray release of Stanley Kubrick's Fear and Desire is without a doubt one of the most significant home video releases of the year. While certainly not a great film, Fear and Desire is important in film history for introducing us to one of our most legendary directors for the first time.

Released in 1953, Fear and Desire was the first feature film Kubrick ever made, and was such a guerilla production that Kubrick nearly served as a one man crew. In has later years, Kubrick all but disowned the film, actually moving to have screenings of it blocked in some cases (much like he did for A Clockwork Orange in Britain after being appalled by the gleeful reactions he witnessed in theaters). While the film is nowhere near his best work, it clearly shows the roots of greatness, and its availability on home video for the first time ever is doubtlessly something to celebrate for all film enthusiasts and fans of the director.

The film follows a group of soldiers who have crash landed behind enemy lines, and are trying to build a raft to carry them back to safety. But along they way they stumble across an enemy base containing a high ranking general, and hatch a plot to assassinate him before returning home. Things begin to deteriorate for them as their psychological state begins to degrade, and the capture of a young peasant girl threatens to send one of them over the edge.

Having seen the majority of Kubrick's filmography before watching Fear and Desire, it's interesting going back and seeing the roots of Kubrick's fascination with descents into madness. From 2001 to A Clockwork Orange to The Shining, it was a theme that would continue to pop up throughout his career. Fear and Desire bears all the hallmarks of a first time filmmaker working behind the camera - it's stiff, the performances at times amateurish, and the narration is woefully miscalculated. But it also has great use of light and shadow and an almost Soviet style editing technique that recalls the work of Eisenstein and Kirsanoff (there's even a visual reference to Kirsanoff's Menilmontant). Kubrick would go on to direct the superior Paths of Glory four years after Fear and Desire, using many of the same ideas to better results, but the potential is clearly there. The blu-ray transfer, taken from a 35 mm restoration of an original print from the Library of Congress is nearly pristine. The Kino disc also includes Kubrick's documentary short, The Seafarers, which will be of interest to Kubrick diehards as well. While Fear and Desire may not be an essential piece of the Kubrick canon, it is certainly an essential piece of film history. For the first time ever, the roots of one of cinema's great masters is available on home video for a wide audience to finally discover.