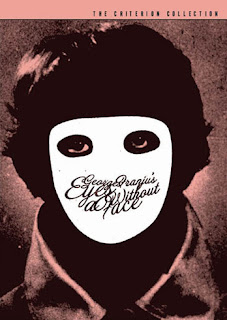 Released the same year as Alfred Hitchcock's seminal Psycho, Georges Franju's eerie Eyes Without a Face is perhaps even more shocking for its time. While much of its horror is done through suggestion and atmosphere, much like Psycho, Franju lingers on moments of such gruesome detail that it is surprising that the film was released in 1960.

While not a "gory" film per se, it's still quite shocking, most especially because its subject matter. The film centers around a mad surgeon whose daughter's face is destroyed in a car accident, leading him on a wild quest to successfully remove the face off another woman and transplant it onto his daughter. After countless failed experiments, the bodies begin to pile up, all with similar looks, all missing their face, and the authorities are soon on the lookout for a serial killer.

More than anything, what makes the film so creepy is the masked visage of the daughter, hidden by a blank, expressionless mask that nevertheless seems to convey every emotion in the spectrum. The performance of Edith Scob as the daughter Christiane is remarkable in that we never actually see her face, but always seem to know how she is feeling at any given moment.

Franju lingers on images of the gruesome surgical procedures, which sets it apart from films of its day, but it never feels as if he is showing too much. He knows just what to show, and just when to hold back, making Eyes Without a Face a truly unsettling experience indeed. It helped turn crime stories into their own horror genre, later informing such films as The Silence of the Lambs and The Skin I Live In. It remains an unnerving, haunting experience that stands toe to toe with any other great horror film of the era.
Email Post