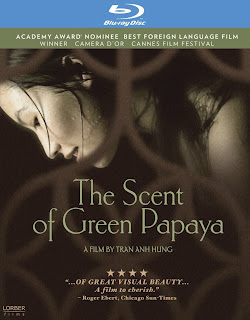 It is somewhat serendipitous that both Betty Blue (37°2 le matin) and The Scent of Green Papaya should find their way onto Blu-ray for the first time on the same day. While the two films may not seem to readily share many similarities, upon closer inspection they are much more alike than they are at first glance.

Both films received Academy Award nominations for Best Foreign Language Film (France's Betty Blue in 1986, and Vietnam's Green Papaya in 1993). While neither film took home the statuette, (those honors went to The Netherlands' The Assault and Spain's Belle Epoch, respectively), both films have faded somewhat into cinematic history. A fate that is unfair in both cases.
That is where the surface similarities end. But both films center around a female protagonist in love. While the two women approach love in vastly different ways, both of these films are emotional journeys of self discovery.

In Tran Anh Hung's The Scent of Green Papaya, 10 year old Mui is given away into servitude by her impoverished family. The family she goes to serve, while wealthy, is fraught with problems of their own. Their youngest son is an antagonistic brat who enjoys tormenting Mui at every turn. The father has an unfortunate habit of abandoning his family, and does so once again, leaving them struggling just to buy rice. Their youngest daughter had passed away years before, and Mui fills a void in the mother's heart. Mui's finds escape in the every day beauty around her. She keeps a pet cricket and relishes examining water droplets on leaves. She especially fascinated with papaya, a favorite dish of the family, and its texture and scent come to define her childhood, a memory she often revisits later in life. 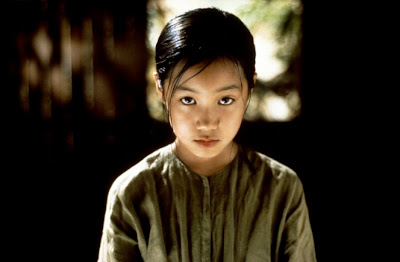 A scene from Tran Anh Hung's THE SCENT OF GREEN PAPAYA.
The family's economic hardships begin to weight on them, however, and they are forced to send Mui away. Now a grown woman, she takes up residence with a young pianist and his fiance. The two begin to form a tentative relationship, as he teaches her to read and write. Under his tutelage she grows as a woman, and soon their relationship becomes something much deeper.

Tran Anh Hung steeps the film in the atmosphere of pre-war Vietnam. And even though it was filmed entirely on a Parisian soundstage, it evokes a rich feeling of time and place. The sound of unseen jets suggest the oncoming war encroaching on a society on the brink of destruction. Hung's use of sound in the film is of particular note, as it is key to the film's tone, yet often greatly symbolic and presented without visual context. The planes, for instance, are never seen yet the audience instantly realizes what they mean. They are the only suggestion of the looming Vietnam war, but their presence is keenly felt.

The Scent of Green Papaya is an unusual and evocative film punctuated by lush cinematography sound design. It's a strangely intoxicating work, often wordless, and characterized by an oddly entrancing score. Hung creates a singularly enchanting atmosphere, as delicate and mysterious as the smoke of incense. It's a strange beauty of a film, and Kino Lorber's gorgeous new blu-ray transfer only enhances it. From the lovely box art to the film itself, the film bursts with startling clarity. 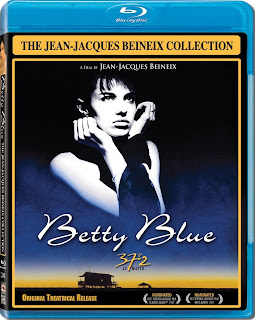 Betty Blue, on the other hand, while not presented in such an elaborate package, packs a pretty big visual wallop as well. A part of a wave of French filmmaking in the 1980s dubbed Cinéma du look by French critic Raphaël Bassan in 1989. These films tended to favor style over substance, containing often conventional plots while focusing on a strong sense of visual style. Jean-Jacques Beineix was one of the key directors to follow this trend (in fact, some would say he started the movement with his 1981 film, Diva), and in 1986 he was awarded with an Oscar nomination for Betty Blue.
Here, love turns into obsession for a troubled young woman named Betty, who moves in with her handyman boyfriend, and changes his life forever.

Betty and Zorg had only slept together a few times before she showed up on his doorstep looking for a place to stay. He accepts her, but soon discovers she has deep seeded issues he had never seen before. One day, while tearing through his apartment in a fit of anger, she discovers a novel he had written and becomes convinced he is a brilliant writer, and is determined to get his novel published. It is the beginning of a long journey for the two of them, as they move away to Paris to start a new life together. And while Zorg only falls deeper in love with Betty, Betty only slips deeper into insanity - a tumultuous free spirit whose unbridled enthusiasm for life is matched only by her fiery self destruction. 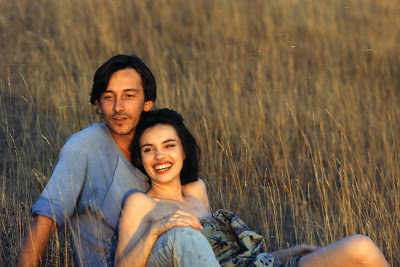 Betty and Zorg in love in Jean-Jacques Beineix's BETTY BLUE.

Betty Blue is a wildly erotic excercise in pure cinema, and the blu-ray presentation by Cinema Libre enhances Beineix's striking color palate. The technical aspects of the disc, however, leave something to be desired. The subtitles are a hard to read yellow tint with an annoying back shadow that is completely unnecessary and often frustrating. The menus are also not easy to navigate, and since the disc automatically starts playing, it is only accessible over trailers or the film itself. Still, it doesn't detract from Beineix naturally involving story. It's a vibrant and messy tale of doomed love that, while occasionally over the top, is a quintessential piece of mid-80s arthouse cinema.

ALSO ON DVD TUESDAY | LOOKING FOR FIDEL (★★★), Oliver Stone's intriguing look at Cuba's notorious leader, Fidel Castro. Stone was granted unprecedented access not only to Castro himself, but to political prisoners and dissidents as well. Castro proves himself a lucid and intelligent man in this surprisingly balanced, if brief, portrait of one of the world's most controversial figures. Brian De Palma's BLOWOUT, a reworking of Michelangelo Antonioni's Blow-Up, arrives on Criterion disc for the first time, while Terry Gilliam's FEAR AND LOATHING IN LAS VEGAS makes its Criterion Blu-ray debut.
Email Post