Review: "Chacun son Cinema (To Each His Cinema)"

Omnibus films, by their very nature, tend to be hit-and-miss affairs. Even Paris, je'Taime, as much as I loved it, had its weak links (most notably Olivier Assayas' Quartier des Enfants Rouges). The same is true for Chacun son Cinema (To Each His Cinema), a collection of 34 short films by 36 of the world's most renowned filmmakers, that was commissioned to honor the 60th anniversary of the Cannes Film Festival last year.

Each director's challenge was to create a three minute film that somehow describes "their state of mind of the moment as inspired by the motion picture theatre."

The overall effect is less cohesive than that of Paris, je'Taime because it presents each film as a separate work, complete with separate end credits after each film. But it also gives room for each film to be digested before moving on to the next, each one like an individually wrapped present from a favorite rich relative holding wonders untold. 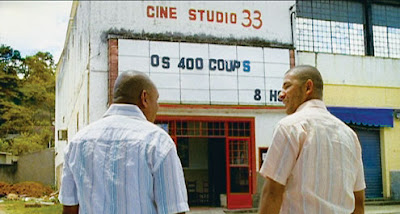 Castanha and Caju in Walter Salles' 5,557 Miles From Cannes
There are quite a few gems to be found her, including the aforementioned Anna, Lars Von Trier's darkly comic Occupations, in which he plays himself at the premiere of Manderlay trying to deal with a talky neighbor who doesn't realize who he is, Wong Kar Wai's atmospheric I Travelled 9000 Km to Give it to You, about two lovers who meet in a screening of Jean-Luc Godard's Alphaville, and evokes the indelible imprint that film can leave when identifying time and place, Abbas Kiarostami's Where is My Romeo, which memorably examines the emotional female reactions to Franco Zefferilli's Romeo and Juliet, and Elia Suleiman's absurdly funny Irtebak (Awkward), which stars the director himself as a director at a film festival for whom nothing is going right.

The films that left the greatest impression on me, however, were the ones that seemed to mourn the modern state of cinema, which is probably why I so identified with Andrei Konchalovsky's Dans le noir (In the Dark), which introduces us to a lonely theater owner (Yola Sanko) sitting enraptured by Federico Fellini's 8 1/2 in an empty theater, except for a young couple obliviously making out in the back. Hou Hsiao-Hsien's The Electric Princess House takes a similar theme, showing families gathering and buying refreshments at a busy theater, juxtaposed with Robert Bresson's Mouchette playing to an empty house. 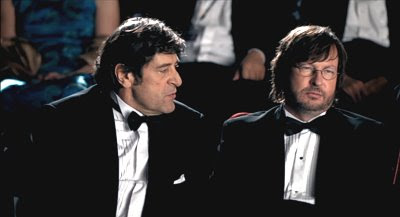 By far my favorite segment, however, was Atom Egoyan's Artaud Double Bill, in which two friends who were supposed to meet at the same film, end up in two different theaters, one showing Egoyan's own film The Adjuster, and the other Jean-Luc Godard's Vivre sa Vie, where the characters in the film watch Carl Dreyer's The Passion of Joan of Arc. Enthralled by the film and the beauty of Antonin Artaud, the woman begins capturing the film on her camera phone, sending it live to her friend in the other theater, who becomes so enraptured by Joan, even on the smallest of screens, totally ignores the film she is in and gives herself up to Dreyer's timeless masterpiece.

The film had an impact on me first because of my deep love for The Passion of Joan of Arc, but Egoyan's film seemed to sum up the entire point of Chacun son Cinema in three heartbreaking minutes. Cinema, as we know and love it, is dying. It has been reduced to a commodity readily available whenever and wherever we want it - convenience has overtaken that collective experience. But it also recognizes the power of cinema - even on the small fuzzy screen of a cell phone, Joan of Arc's greatness overtakes the film being played on the big screen in front of her. The poignancy is the flippant disregard with which it is shown on the phone - indicative of our current "nothing is sacred" film culture. 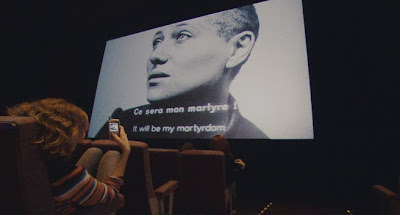 There are a few weak links, as there are with any omibus films. Bille August's The Last Dating Show is too precious and cloying, and ultimately just doesn't jell, while Ken Loach's Happy Ending, about a boy and his father trying to decide what movie to go see, before ultimately deciding just to go watch a ballgame, throws the baby out with the bathwater and ends the film on an odd note, and seems to spit in the face of the film's ultimate theme of celebrating cinema, despite being in line with Loach's contrarian spirit. I also wasn't a fan of Raymond Depardon's aimless opener, Cinéma d'été (Open-Air Cinema), which didn't seem to serve much of a purpose.

Despite its weaknesses, however, Chacun son Cinema is ultimately something to be celebrated. It takes that grand art form that unites and divides us all, and creates a sometimes funny, poignant, and heartbreaking look at what it is that makes us all love it so. Even today, when iPods, cell phones, and the internet have created a climate where cinema is no longer as exalted and valued as it once was, there is still great beauty and magic to be found in the flickering lights in the darkness. In a world where Mouchette plays to empty houses and The Passion of Joan of Arc is broadcast on cell phones, Chacun son Cinema reminds us of the power and the glory of that mythical medium we call the movies.

Anonymous said…
Now this I gotta see ASAP, "Chacun son Cinema reminds us of the power and the glory of that mythical medium we call the movies."

I think I might need a little reminder.
2:08 AM

Matthew Lucas said…
I think you would like it Nicky. It's a must see for every cinephile.
2:38 AM

Rana Louai said…
hello may i ask what did you think of anna in specific? like what do u think it touched :D
1:17 PM