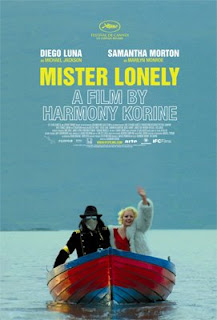 Judging by its 44% Tomatometer rating over at Rotten Tomatoes, Harmony Korine's Mister Lonely hasn't exactly been lighting many critics on fire. And it's easy to see why - it's a rambling, bizarre, often overly precious film with two separate storylines that have seemingly zero connection. But I loved it.

Call me crazy, call me a naive romanticist, but there's something about the odd, shimmering peculiarity of Korine's tritych fantasy that swept me off my feet. It's a delicate, melancholy tale of a lonely Michael Jackson impersonator (Diego Luna), who meets an alluring Marilyn Monroe look-a-like (the luminous Samantha Morton) while performing on the streets of Paris, and having nothing to tie him to his rootless existence there, accompanies her to an isolated country commune of other celebrity impersonators. There he finds his place among a self-contained society of people who are just as unhappy with themselves as he is, and find solace is becoming someone that they could never be. But their sheltered lives soon begin to take a toll, as they further lose themselves in their chosen personas, which can't always mask the real pain beneath the surface.

In a seemingly unconnected subplot, the film follows a group of missionary nuns, for whom a near tragedy is averted and turned into a miracle, prompting the priest in charge (Werner Herzog...yes, that Werner Herzog) to arrange a trip to the Vatican to showcase his newfound gift from God.

It is that seemingly random, unfocused nature of the film that has drawn so much criticism, but for me it was part of the charm. Korine has fashioned such a wholly unique narrative of such a strange and rare beauty that I find it hard to find fault in his creative zeal. It revels in the unusual and unexpected, finding a sad, haunting beauty even in the darkest situations. The dichotomy of the film's dual nature - light and dark, yin and yang, naive and cynical, may seem unfocused and confused, but Korine's real achievement here is the creation of feelings. The most random, offbeat things become objects of surprising gravity, making for a disarmingly moving experience.

Korine also creates a completely endearing cast of characters, that range from Charlie Chaplin to Abraham Lincoln, from Little Red Riding Hood to James Dean, Sammy Davis Jr., Shirley Temple, Madonna, and the Three Stooges - some agents of strife and others of comfort.

Mister Lonely is a film that exists squarely in its own peculiar reality, where the Queen of England sleeps with the Pope, eggs can sing, and nuns can fly. It is a world at once uplifting and sad, supporting and lonely, charming and frightening - but always deeply enchanting. It is a dark film, but one that even in its sadness finds a way of being oddly life affirming. For all of its surreal beauty, Mister Lonely is a feast of thematic symbolism just begging to be lost in. The question is whether or not you will ever want to find your way out again. Either way, it is a journey well worth taking.

Anonymous said…
You make a strong case for this Korine film, and I must say I am always intrigued with his work, if not really satisfied. Hence I found GUMMO a disjointed and gloomy affair, but I have a close friend, who is a tasteful film lover, who finds the director brilliant. Excellent review, I must check this out.
9:28 AM

Matthew Lucas said…
I haven't seen GUMMO, but MISTER LONELY is often surprisingly sad. It constantly takes unexpected and tragic turns, but something about it always stays beautifully positive. It's hard to describe, you just have to see it.
11:54 AM

Anonymous said…
Great SEO resource.  Good Job, definitly a fan and will read more from your posts and from the other seo's. Thanks for the great dicsussion
12:34 AM