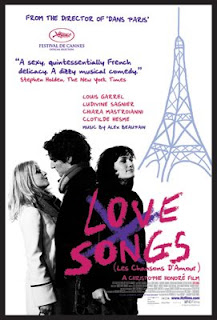 I've heard surprisingly little buzz surrounding Christophe Honoré's Love Songs. In fact the film didn't even cross my radar until J.D. over at Valley Dreamin' started talking it up a few months ago. Other than that, the critics and the blogosphere have been relatively quiet about this delightful French truffle.

Which is a real shame, because Love Songs is the best modern musical since Once. Which isn't really saying much, I know, but it certainly blows Mamma Mia out of the water, and bears instant comparisons to last year's Irish sensation due to its naturalistic style and more contemporary music.

But that's where the comparisons end because Love Songs takes a very different approach to its material. 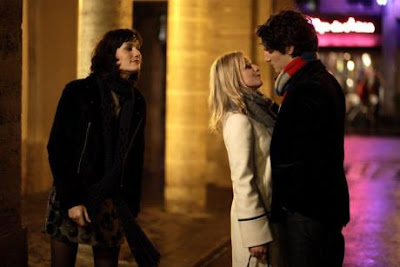 One of the things that struck me the most about the film was the effortless charm of the cast, especially Louis Garrel (The Dreamers), who practically burns up the screen. Their chemistry is undeniable, and it comes across the seamless transitions into the songs - an area where Mamma Mia suffered greatly. The songs come across as naturally as a conversation, always moving the story along.

The most obvious standout, of course, is Alex Beaupain's gloriously heartbreaking music, that strikes the perfect balance between modern pop and showtunes, something akin to The Umbrellas of Cherbourg meets Spring Awakening, with the cast doing a remarkable job bringing the songs to life. 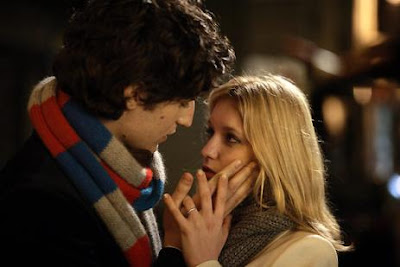 It's all so intoxicating, so effortlessly sexy, that it's easy to forgive the fact that it drags a bit in the middle section, but it quickly finds its footing again once the new love interest is introduced. I loved the fact that the movie dwells squarely in a world where love crosses the boundaries of gender and defies the labels of straight and gay. The idea that a person's soulmate could literally be anyone, be they male, female, or undecided is a universal one, and Love Songs handles that with a refreshing degree of normalcy. Love knows no bounds, and Honoré demonstrates that with beauty and grace, through Beaupain's lovely songs and the gorgeous cinematography by Rémy Chevrin.

Honoré takes his cues from French classics such as the aforementioned Umbrellas of Cherbourg and Jean-Luc Godard's A Woman is a Woman to create the film's bubbly yet realistic feel that seems at once heightened and immediate, taking place on a slightly higher, more romantic plane but never losing touch with reality.

Love Songs is one of those films I just wanted to envelop myself in completely, losing myself amidst its enthralling French charms. For those willing to give themselves up to it, Love Songs offers a feast for the mind and the heart, overwhelming the senses and transporting us into its delicately constructed rhythms. It's the year's tastiest surprise.

J.D. said…
It's such a beautiful film, both literally and tonally. The songs are excellent, and the acting is so amazingly delicate that it seems like we're just watching people instead of actors. I LOVE IT.

Anonymous said…
I really wana see this so bad!
5:01 AM

Anonymous said…
Well, Matthew, I am with you lock, stock and barrel on this film. I loved it, and my own rating is the equivalent of your own 3 and a half of four. It was an infectious, sublime, and fully engaging romp, and that score is frankly unforgettable.
I am not so sure that most of the intelligensia are as thrilled with it as we are, but who cares? This is a strong contender for the year-end ten best list. I will look at the DVD to confirm my strong theatrical reaction. As is generally the case when you (or anyone) loves something, your talent rises to the top! Beautiful work here.
9:33 AM

Matthew Lucas said…
I kind of doubt this will appear on my own top ten list at the end of the year (seeing as how it is currently #14 for the year...but the list often fluctuates before I make my final list), but I did love it. I think it's one of the year's most sublime romances, and I fell for it lock stock and Garrel. ;-)
11:56 AM