Despite having to suffer through the interminable Brideshead Revisited yesterday, my movie going day was redeemed by three things

2. My copy of Carlos Reygadas' Silent Light arrived from Amazon.uk.

3. I bought a copy of Criterion's new release of Carl Theodor Dreyer's Vampyr. 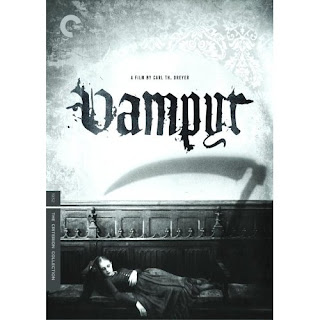 I've been salivating over the Criterion Vampyr for months now, so I was thrilled to finally get my hands on it. I was first introduced to the film in my high school film critique class, and have been seeking it ever since. Add that to the fact that it is Dreyer's follow up to his masterpiece (and my all time favorite film), The Passion of Joan of Arc, and it is an absolute must have in my collection.

And what a a beauty it is. I'll have to wait till tomorrow to watch it properly when I get my new TV, but just having it around sends little chills of excitement up my spine in anticipation.

The same goes for Silent Light, which I've been itching to see again ever since I first saw it last month. It's easily one of the ten best films of the decade, and if it would ever make it out of the distribution nightmare it found itself in after Tartan Pictures folded, then it could find the audience it deserves.

As for I'm Not There, it really needs no explanation. Cate Blanchett is God. End of story. With three movies like that on my shelf, it's enough to erase all the unpleasant memories of Brideshead Revisited.
Email Post

Anonymous said…
My copy of SILENT LIGHT arrived last week, but I lament I haven't watched it yet, as I've been running all over to the theatres. I am happy to say I've owned both VAMPYR and I'M NOT THERE for quite some time, and they are treasures in the collection. I toast you for these acquisitions.
9:20 AM

Anonymous said…
Matthew, you will be quite shocked to know that PATTI SMITH has a barely passing grade at RT, as critics have not been lining up behind this film by a long shot. I am not saying this to rub it in at all, as I liked the film myself, and in large measure concur with your superlative review. (I am giving it 3.5 of 5 in my own review) But it just goes to show you how these sites will often surprise you for good or for bad.
11:23 AM

Anonymous said…
I knew critics would not be totally into Patti Smith, but I loved it, and that's all I need. I think that's what we all need really, our own opinions. I just think it is a very deep film and anyone going into it with ideas and misconceptions about Patti and the film will leave the theatre feeling totally blasé. I, however, did not.

And I too own "I'm Not There" and "Silent Light," love them both, and would love to see "Vampyr" on a Criterion disc, that must be something indeed.
12:03 PM

Matthew Lucas said…
I shouldn't be too surprised, something as unconventional and borderline avant-garde will always divide people. Many great films aren't appreciated in their own time.
6:21 PM

Anonymous said…
Yep, I agree with you on that point Matthew.
12:56 AM