See "No End in Sight" for Free

Charles Ferguson, the director of the powerful and illuminating documentary, No End in Sight, will be screening the Oscar-nominated film from September 1st to November 5 for free on Youtube. 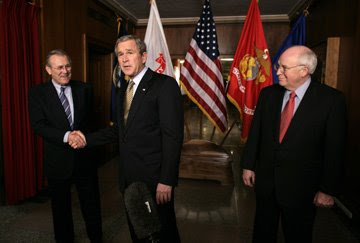 That's right, Ferguson is putting the importance of the film's message ahead of profit, which shows just how dedicated he is to getting his message out there in time for as many people to see it as possible before the election.

No End in Sight is a fantastic film, and I highly recommend that everyone watch it. This is must-see filmmaking that takes a hard-hitting, even handed look at the build-up to the Iraq war and the jaw-dropping incompetence with which it was staged, from the ultimate insiders - the people who were there and in charge.

Don't miss your chance to see this film, and spread the word. This is the kind of thing that opens eyes and changes minds.

Daniel said…
Thanks for the tip, that's pretty awesome! This should have won Best Doc last year in my book...
11:51 AM