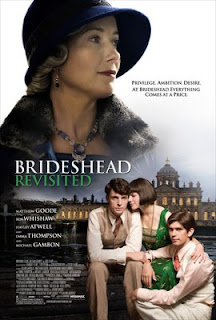 In a perfect world, film criticism would be a totally objective profession, commenting on the film's artistic merit and craft without letting personal feelings get in the way. But this is not a perfect world and I am not a perfect critic. Then again, any art form is a personal medium, driven by the personality of the artist. What is a writer if not an artist of words, and a filmmaker an artist of film? It takes a personal point of view to comment on a personal work of art, to fully appreciate and comment on the the emotions and feelings that art evokes.

That being said, I hated Brideshead Revisited. Not because it is a bad film, but because I detested the characters and the way I felt the film was pushing the audience's sympathies. 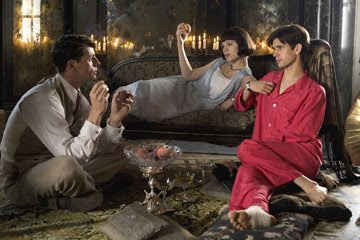 The film centers around Charles Ryder, a painter and student of history, who meets a charming young aristocrat named Sebastian Flyte at university, and they quickly becomes fast friends. However, Sebastian's attraction to Charles is much more than mere friendship, which leads to tension when Charles meets Sebastian's beautiful sister Julia (Hayley Atwell) at the family's stately mansion, Brideshead. Ruled over by matriarch Lady Marchmain (Emma Thompson), the strict Catholic family is rife with guilt and mistrust, as Sebastian is driven to alcoholism by his mother's constant disapproval of his homosexuality, which is compounded by Charles' newfound love for Julia.

It's hard not to like Emma Thompson (even as such a despicable character), and indeed the film seems to come to life when she is on screen. But when she is not, the film seems to deflate, and we are left to the troubles of one of the most miserable set of human beings to grace the silver screen in many a moon. I felt nothing but hatred for Charles as he led Sebastian on, disillusioning him into believing the attraction was mutual, while he pined over Julia. I found Sebastian's incessant whining nearly unbearable (not to mention the portrayal of all homosexuals as insipid, effeminate drama queens), and Julia and Lady Marchmain's pious devotion to strict, guilt-ridden Catholicism insufferable. They lived in a misery of their own devising, and that misery translates to the audience as well. 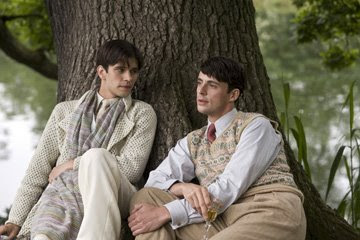 The film looks good thanks to the lush costume and production design, and features some fine performances (especially from Thompson), but it's languidly paced and far too long. It feels as if it reached several good endings before it finally chooses one. Every time I thought it was going to end, it just kept plodding on, running the story in the ground long after it seemed to have run its natural course.

I have seen films far worse than Brideshead Revisited this year, but none have pissed me off quite as deeply. I simmered most of the way home after seeing it, still too angry to speak without ranting about how much I hated Charles and what he did to Sebastian, whose side I was pretty much firmly on, even if it was partially his fault as well. It really bothered me that the filmmakers seemed to be pushing us to want Charles and Julia to get together, while Sebastian is spurned and heartbroken out of Charles' thoughtlessness. Yes I know that's the story, but I have every right to dislike it if I want, and I found the film to be thoroughly unpleasant and dour.

It probably doesn't deserve quite as much hate as I've directed its way, but that doesn't mean it's a good film in reality. It needs the touch of someone with a lighter hand to look deeper beneath the surface. Instead we get this boring period soap opera with no one and nothing to connect to. It's just a lot of pretty faces in pretty costumes making each other, and the audience, completely miserable.

Anonymous said…
Yep, I completely agree with this review. Even two stars is being nice to it. I did love the BBC mini-series, but this film has a number of issues, which you have aptly elaborated on.
10:15 AM

Matthew Lucas said…
Sam - I never saw the BBC version, but I don't know if I want to. The whole story just bothered me.

Hayden - Thompson is most definitely the best part of the film, and she isn't in it nearly enough.
9:11 PM

Anonymous said…
I understand what you are saying Matthew, but the BBC version did not get a bad review anywhere from anyone. In fact it received lavish praise on both sides of the pond. It is one of their highest rated shows ever. The story was handled far more differently there, and it is rightly considered a classic. This new film is a "Cliff Notes" adapation of that original mulrti-hour incarnation.
9:24 AM

Anonymous said…
Ouch...and you were looking forward to it a bit, same like me...well, I still want to see I, but I do feel somewhat cautious now.
12:00 PM

Anonymous said…
Perhaps the fact that the spectacularly-reviewed BBC series is 588 minutes long and has a completely different focus than does this new abomination may be the prime reasons why we have such a stark difference between "great" and "poor."
12:51 PM

Sam - It may be something I'll see eventually, but I'm definitely in no hurry. I could see where it could be made into something workable...but my hatred for the characters was just about blinding me to everything else.
6:41 PM

Anonymous said…
Well, Matthew, I can understand that position. Fair enough.
12:58 AM

Anonymous said…
I finally see this at the end of this month
6:56 PM

Matthew Lucas said…
Nick, maybe you will see something in it that I did not, but right now no other movie this year has pissed me off as much as this one did.
8:32 PM