Remembering "The House of Sand"

Earlier this evening I was standing in the grocery store check out line, looking at the movies in the DVD rack while I waited, when I noticed they had a copy of Andrucha Waddington's The House of Sand for $9.99. 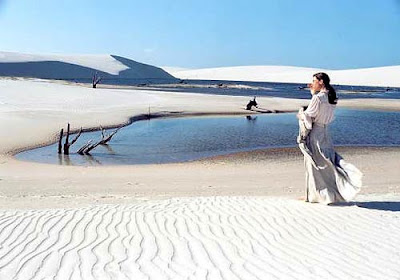 I hadn't seen the film since it was in theaters back in 2006, but I was blown away by it at the time. The film ended up on my 2006 top ten list (#4 on the original list, #7 in the final version), but I saw precious little notice for the film at the time, and even less since. But I championed the film quite a bit in the early days of From the Front Row, and it was among my Front Row Award nominees for 2006. It is a tragically overlooked, under seen gem, and finding it again as I did today (in a grocery store of all places) is cause for celebration.

In this quiet, windswept drama, director Andrucha Waddington and his cinematographer, Ricardo Della Rosa, capture the barren deserts of Brazil with a grandeur to rival David Lean. But the true mastery of "The House of Sand (Casa de Areia)" is its deep intimacy. Told with haunting grace, this story of three generations of women living lonely, restless lives stranded in the barren Brazilian desert is the stuff of which grand epics are made, but Waddington keeps the focus deeply personal with the hand of a born enthraller, using real-life mother and daughter Fernanda Montenegro and Fernanda Torres to play the three women at various stages in their lives. Told without music (the sound of the wind and the shifting sands provide the soundtrack), "The House of Sand" is a moving and deeply felt examination of the relationship between mothers and daughters and the ties that bind us across generations. It doesn't just take your breath away - it steals it.

Naturally I bought the DVD, and can't wait to revisit it. For those of you who have not had the pleasure of seeing it, I highly recommend you seek it out. It's a timeless masterpiece (that's right, I used the "M" word) that deserves so much more attention than it received upon its release.
Email Post

Anonymous said…
I have not seen this, but your thoughts on it are awesome. I am definitely going to check it out, but something tells me that it is not going to be in my grocery store. I'll made an adventure out of finding it then :)
2:03 AM

Matthew Lucas said…
I whole heartedly recommend this Nicky. I watched the last 10 minutes or so when I got home. I've only seen the movie once, 2 years ago, and just watching the ending again gave me chills and nearly brought me to tears. It's definitely worth the adventure.
2:40 AM

Daniel said…
Arrggh, I remember wanting to see this way back when and missing it in the theater! Completely forgot about it since then, so thanks for the reminder and recommendation.
12:22 PM