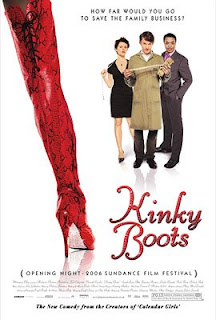 I didn't realize that Brideshead Revisited director Julian Jarrold had also directed the delightful Kinky Boots until I got home and was doing the usual IMDB research for my review. I thought I recognized the name from somewhere, but it wasn't until then that it dawned on me.

I loved Kinky Boots. It was one of those films I went into having no idea what to expect, and walked out totally and completely enchanted. It treats its admittedly edgy subject matter - about a timid man who inherits his father's traditional, struggling shoe company and turns it into a manufacturer of boots for drag queens after he meets a lovely and domineering transvestite named Lola (Chiwetel Ejiofor) - and treats it with a tender charm and gentle humor that is both refreshing and wonderfully funny.

But to watch Brideshead Revisited, you would think all homosexuals are whiny, wimpy, simpering, flamboyant drama queens. Why the sudden change? Jarrold went from a film that I adore to a film that I loathe so much that it still pisses me off just to think about it.

Kinky Boots is a tragically overlooked gem of a film - Brideshead Revisted deserves to be buried. I hope to see a return to that light touch that we have come to expect from Jarrold in Kinky Boots and Becoming Jane, not the heavy handed, misery laden self pity of Brideshead.
Email Post

Daniel said…
I should really see this. I was just talking about Ejiofor the other day and mentioned that I'd missed this and it was probably pretty good....
5:00 PM

Ryan McNeil said…
This is one of those over-looked films I love to reccomend to people on DVD.

Favorite line of the whole movie for me is "Please tell me I haven't inspired something burgandy!"

Matthew Lucas said…
Daniel - don't go in with huge expectations. It's a charmer that sneaks up on you. And Ejiofor is very good.

Mad-Hatter - yeah I've recommended it a few times myself. Sadly it's one of the few films I like that I don't own on DVD...maybe I should fix that soon...
6:39 PM