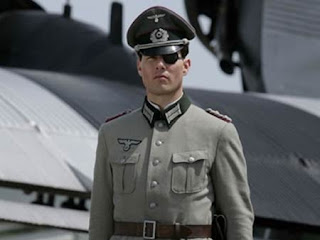 Bryan Singer's much discussed Tom Cruise WWII vehicle Valkyrie, which caused a minor stir when it was pushed from a 2008 release date to Valentine's Day 2009, has now been moved back to December 26, 2008.

The news comes as United Artists CEO Paula Wagner announced that she will be leaving UA. Valkyrie was one of the major UA projects after Wagner took over UA with Tom Cruise in a partnership with MGM.

This should dispel rumors of troubles with the film prompted by the nearly two month delay from a prime release date to a mid-winter one, but this is an interesting new development in the 2008 Oscar race, which now has a new player. MGM says that awards consideration was not a factor in their decision to move the release date back to 2008, but Warner Brothers downplayed The Departed as not an awards film back in 2006, and it payed off. I still don't see Valkyrie being a major player...but MGM could know something we don't.
Email Post

Anonymous said…
I can't get excited anymore for any film that has Tom Cruise in the lead. Still, who can say how the film willa ctually turn out, even if the odds are not good.
4:53 PM

Matthew Lucas said…
I'm not a big Cruise fan, and I've been tepid about this film from day one...but hey, it could be good.
7:15 PM