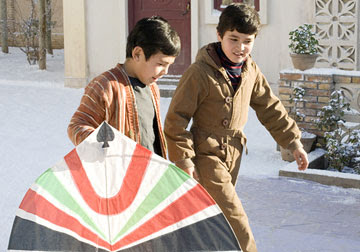 From The New York Times:

LOS ANGELES, Dec. 2 — The “Kite Runner” boys are safely out of Kabul. After months of worrying and diplomatic wrangling from half a world away, the movie studio that is releasing the tale of childhood betrayal, ethnic tension and sexual predation in Afghanistan has whisked to safety four young actors. They were feared to be vulnerable to reprisal because of the film’s depiction of a culturally inflammatory rape scene.

The boys, each accompanied by a relative, arrived in the United Arab Emirates on Friday just after 3 a.m. Eastern time, said officials working with the studio, Paramount Pictures. The movie’s release had been delayed by six weeks to allow time for them to be relocated. It will open on Dec. 14 in 30 markets.

This is good news indeed. It's so sad that the culture of Afghanistan is still such that their participation in the film would be inflammatory, and cannot accept the difference between acting and reality. This is the very thing Khaled Hosseini's beautiful novel is mourning - the corruption and bastardization of Afghan cultures by a group of fundamentalist thugs who try to force everyone into their own narrow viewpoint.

I can only hope these boys fare well, and that the film is good enough to be worth it. If it does justice to the book, it will be stunning.