I found this La Vie En Rose FYC ad through Kris Tapley's Red Carpet District, and I like it a lot. 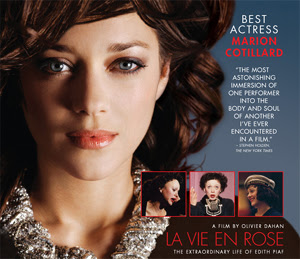 Cotillard's luminous performance is one of the most jaw-dropping and astonishing in recent memory, and highlighting her stunning transformation into Edith Piaf by showing contrasting pictures of her as she usually looks with images from her in the film is a shrewd move, that will hopefully tip the scales in her favor come Oscar time. They used the same tactic in this ad posted at AwardsDaily: 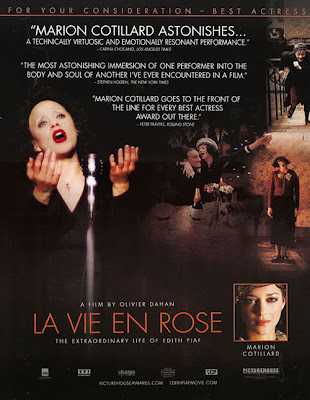 I thought Julie Christie was awfully good in Away from Her, but as the grandson of an Alzheimer's patient...I never really believed it. Maybe that is how some people are when they have the disease...but I've never seen it. She was quite good, worthy of a nomination...but it was not a performance on the level of, say, Judi Dench's in Iris, which is the most realistic portrayal of Alzheimer's I have ever seen on film. Her deterioration was real and palpable...Christie never loses who she is...she's just a slightly more forgetful version of her character.