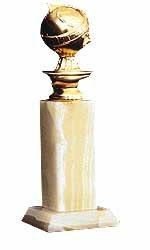 The word on the street (or at least the blogs) is that this year's Golden Globe ceremony is in serious danger of being scrapped altogether.

With many stars refusing to cross WGA picket lines to get to the ceremony, the Hollywood Foreign Press Association is looking for alternatives to a live television broadcast on NBC. WGA strike coordinator Jeff Hermanson has been quoted as saying: “If the Globes is telecast and it is produced by Dick Clark Productions, which is a struck company, we will picket the show.”

I have been behind the WGA all along. They deserve what they are demanding and the AMPTP has been nothing but arrogant and antagonistic to their demands. But this move to shut down the awards shows seems counterproductive, and - dare I say it - self-centered.

The Oscars are about unity - or they're supposed to be. This is the night when everyone from the stars to the sound technicians sit down in the same room and honor each other's achievement, and 2007 is Oscar's 80th birthday, one of the best years for film in recent memory. By trying to stop the awards shows the Writers' Guild is denying recognition for the cinematographers, the costume designers, the art directors, the editors - everyone. This is their night to shine, and I think it would be a great gesture of goodwill on everyone's part to let the Academy Awards proceed as normal. Anything else seems unnecessarily divisive. Stopping the Oscars not only hurts the producers - it hurts everyone involved.

The Academy is honoring 80 years of film this year, and the WGA won't even let them show clips of the nominated films. To me anyway, this seems to be too much.

I support the WGA strike...but I'm starting to question their methods. Am I alone in this, or is the WGA shooting themselves in the foot by appearing too standoffish?
Email Post