A Look at the Race

Sunday was a big day in terms of Oscar precursors. So what did we learn?

Well the big story is, of course, Amy Ryan, who now has four kudos for her Gone Baby Gone performance under her belt, and is in this race in a big way, quite possibly overtaking Cate Blanchett as the new Best Supporting Actress front-runner. At least that is if you listen to Jeffrey Wells. I'm not quite so sure. Blanchett gives the kind of transformative performance that the Academy loves, and Ryan's character is just so revolting that it may turn some voters off. Remember the people voting for these awards are NOT the people who will be voting for the Oscars. 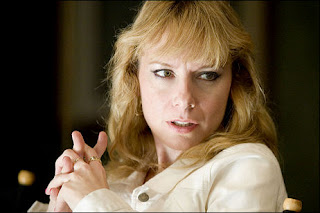 Truth be told, I myself was so disgusted by Ryan's character (a deadbeat, drug addled mother whose daughter is kidnapped) that it didn't really dawn on me what a marvelous performance it was until later. I hated her, and the line between actress and role was totally non-existant. Which is the mark of a truly great performance.

In Blanchett's case, you are always aware that what you are watching is a performance. Which could end up being the case here, but it really isn't Blanchett's fault. She is phenomenal in her interpretation of Bob Dylan in I'm Not There, and totally transforms into the character...but we never stop being aware that this is Cate Blanchett. Like I said, this is not her fault at all...but may be something to consider when it comes to deciding who will win the award. Right now Ryan is on fire, and I'm Not There seems to have peaked. 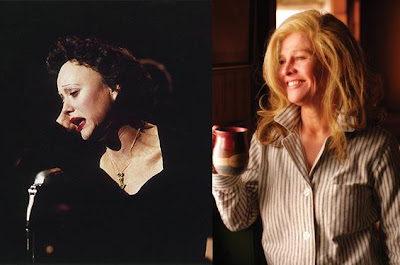 The Best Actress race is shaping up to be a showdown between La Vie En Rose's Marion Cotillard and Away From Her's Julie Christie. Cotillard's is still the best performance I have seen this year, but Christie is proving to be a formidable contender, and a locked Oscar nominee.

No Country for Old Men, of course, is also generating serious heat...but I remain cautious about its Oscar chances. I'm pretty sure it will be nominated...but this time last year United 93 was the one racking up all these awards. So anything can happen.

Atonement has been totally shut out (except for its appearance in the National Board of Review's top ten list), which seems to put a hole in its Oscar front-runner (which seems to have been transferred to No Country) status. But lets not forget that Babel was also a pre-ordained frontrunner last year that was resoundingly ignored by the critics' awards (in the Best Picture races anyway)...as was Crash which ended up being the dark horse winner without winning any other major Best Picture award (it wasn't even nominated by the Golden Globes). 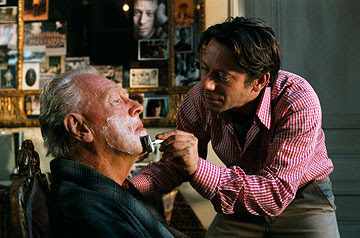 The French film The Diving Bell and the Butterfly has also had a strong showing, but I feel like its Best Picture chances are slim. Foreign films have a hard time there. But its director Julian Schnabel (who also won several awards today) may find himself in the race as a consolation nod, especially since the film is ineligible for Best Foreign Language film.

Speaking of Best Foreign Language Film, the Romanian abortion drama 4 Months, 3 Weeks, and 2 Days became the official front-runner since Diving Bell is out, with several mentions.

The WTF award of the day goes to the New York Online Critics for awarding The Darjeeling Limited their best screenplay award, and The Lives of Others its foreign language award, which had a one week Oscar qualifying run last year...making it a 2006 release.

It's still a very wide open year...even more so than last year. Needless to say, it's going to be interesting.
Email Post