Review: "For the Bible Tells Me So" 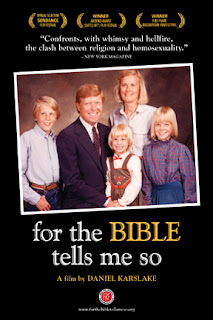 Why are we not hearing more about For the Bible Tells Me So? Daniel Karslake's powerfully moving documentary is one of the year's essential films, and yet it has made little impact in the public square.

It seems now that, unless you are Michael Moore or a penguin, documentaries just don't connect with modern movie goers. Which is a shame, because For the Bible Tells Me So is a film everyone should see. But then again so is Sicko, and No End in Sight, and God Grew Tired of Us...the list just goes on and on.

2007, documentary-wise, has been an exceptional year, if not a financially successful one. There have been many great documentaries that have tackled such far-ranging issues as the Iraq war , the American healthcare system, the genocide in Darfur, and the plight of the Lost Boys of Sudan. 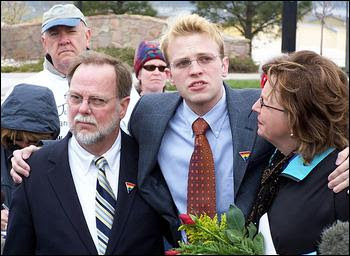 For the Bible Tells Me So takes an intimate look at homosexuality and the Bible through the eyes of five Christian families with gay children. Through interviews with the families, theologians, religious leaders, and Biblical scholars, Karlaske pieces together a portrait of homosexuality in modern day America - not in bustling, liberal-leaning cultural centers where it is more open and visible, but in rural and middle America, and southern Bible-belt communities where gay people still face much misunderstanding and discrimination. The stories range from inspiring to heartbreaking, as conservative parents face the shock of their worst nightmares coming true - having a gay child. It is in how they deal with the shock that forms the film's emotional core, because these tales of hope from ignorance and acceptance from fear and misunderstanding makes for a beautifully uplifting and at times bittersweet window into these people's lives. From the conservative Christian woman whose daughter's suicide inspired her to become a gay rights advocate, to the family of the first openly gay bishop in the Episcopal church, to the family of Dick Gephardt, each story has its own uniquely beautiful message that people can easily relate to. Only the most hardline homophobes could fail to be moved by it.

Karlaske makes no bones about who the "villains" of the piece are. Conservative evangelical leaders such as James Dobson and Pat Robertson who use the Bible as a weapon meant to be (selectively) literally interpreted to condemn those they disagree with, but makes the wise decision of keeping its focus personal and intimate, bringing the issue home for many who may not encounter it on as daily basis. This is no angry, Moore-esque screed. It has a message it wants to convey, but it does so with a calm and even hand, using reason, logic, and above all things, love to get its point across. 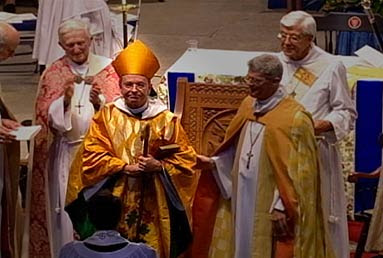 Listening to religious leaders sift through the Bible's few and far between mentions of homosexuality makes for fascinating viewing, and their interpretations and contextualizations, while certainly nothing new, stand at a profound dichotomy with the usual shrill rhetoric of the political sphere. The revelation that, when the original text is analyzed closely, taking into account the context of time period and culture, the Bible never actually condemns homosexuality as a sin (it was merely not useful as a means of procreation...the word for 'abomination' did not mean what it has been taken to mean), is an explosive one that would no doubt be controversial, but it hasn't gotten the kind of attention it needs to have the impact that it surely could.

For the Bible Tells Me So is a masterfully crafted, deeply moving work that could spark much needed conversations. This is the kind of film that could change somebody's life...and those, like mentions of homosexuality in the Bible, are very rare indeed.

FOR THE BIBLE TELLS ME SO; Directed by Daniel Karslake; Not Rated
Email Post

Curiousityloko said…
Daniel Karslake is coming to speak and present the film next week. I'm working to get an interview with him. It seems I will have something to look forward to. Speaking of 2007 and documentaries, were you able to see Academy Award Best Documentary winner, Taxi to the Dark Side?
6:29 PM

Curiousityloko said…
I saw it tonight and met with Daniel. What a great movie.
12:45 AM