"You Are Now Free to Move About...Detroit?"

You know...the Northwest Airlines slogan is "You are now free to move about the country," but so far all they've done for me is get me stuck in Detroit.

Well...actually the hotel the airline put us in is in Romulus. It's like being trapped in a Star Trek episode. 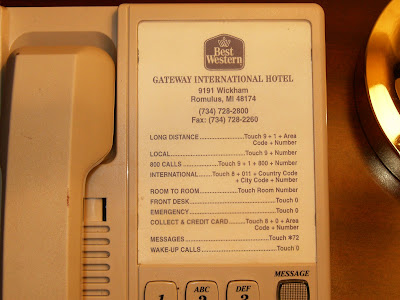 My flight out of Charlotte arrived in Detroit late, causing us to be 5 minutes late to our connector flight to Green Bay...which was the last one of the night with nothing available tomorrow. Lovely. Apparently they couldn't wait 10 minutes...even though they were the same airline and knew there were quite a few people on the flight out of Charlotte going to the Green Bay flight. We finally found a flight going to Wausau, and we'll be driving to Green Bay from there.

But I will definitely have a WiFi connection once I reach Green Bay, so I will be able to keep up with the news and buzz and keep up the posts.