I hate giving good reviews to essentially dumb movies like National Treasure: Book of Secrets, because it makes me feel dumb for doing so. It's disheartening walking into a film like this and seeing a packed house when I saw Tim Burton's miraculous Sweeney Todd twice this weekend in nearly empty theaters. Granted, one is an ultra-bloody, R-rated musical which I saw at very early matinee screenings, and the other is a family-friendly adventure sequel seen in the afternoon on Christmas Day, so you do the math. 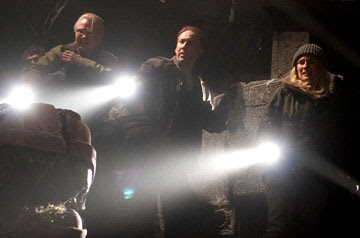 But then, no matter how smart you think it makes you to diss it, it's just hard to hate the National Treasure series. If you can't say anything else nice about it, it succeeds in what it is trying to do...give the audience a good time.

There are worse ways to spend two hours than National Treasure: Book of Secrets, the agreeably breezy adventure sequel to the surprise 2004 hit National Treasure. The story is similar in structure to the first one, except this time Ben Gates (Nicolas Cage) is out with the whole family to clear his great-grandfather's name, a Civil War hero who recent evidence has cast in the light of the mastermind of the Lincoln assassination. Their quest turns into a search for a lost Incan city of gold, the treasure his great-great grandfather was trying to protect from Confederate hands. 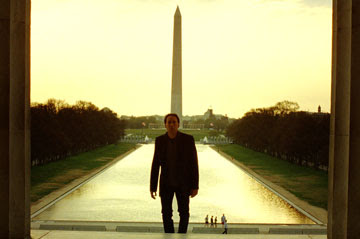 What follows is a labyrinthine and increasingly silly parade of clues and historical puzzles for the heroes to solve to bring them closer to the treasure and vindication of their family name. A good deal of it is nonsensical and the characters' motivations aren't always clear - especially the reasoning driving the "villain," in the form of Ed Harris. His character is more of a plot device subject to the screenwriter's whims than a person.

This is not the kind of film that I am generally drawn to, but despite being pretty much a retread of the first one it's a pretty passable diversion. There is nothing earth shattering or extraordinary about Book of Secrets, but it accomplishes its goals and should be commended for that if for no other reason. The crowd around me enjoyed it immensely...I probably only cracked a smile two or three times, and chuckled out loud a couple of times - nothing special but nothing heinous either. At least they were only messing with history instead of a much beloved novel like Love in the Time of Cholera or The Kite Runner. 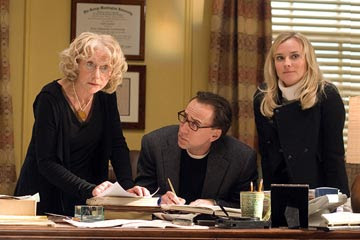 In the world of movies, especially the historical clue sub-genre currently popularized by The Da Vinci Code, National Treasure: Book of Secrets is as inoffensive an entertainment as they come. Even when its credibility is stretched thin, it coasts through on charm...which gives it just enough points to make it not a waste of time.

Anonymous said…
I never saw number one, I'm no film snob, but it isn't my scene. The whole action thing, not for me. But my little sister wants to see it, and it's got Helen Mirren and Ed Harris, and Nic Cage, so I might see it, but then I have to watch number 1 too... I hope I have a good time...
3:13 AM

Anonymous said…
Admitted film snob here. It takes stones to stand up and admit a 'dumb' movie wasn't horrible. It's definitely easier (and sometimes more fun) to trash it and move on.

On the other hand, movies like this don't really need anyone's help. They're going to do fine with or without movie critics.
1:30 PM

Matthew Lucas said…
As an admitted film snob myself, it was extremely hard to admit that I didn't hate the film, even though I wanted to. But hey, sometimes you just have to bite the bullet and be honest.

Now we'll see if I feel the same way about "Aliens vs. Predator: Requiem" tomorrow, haha.

I haven't seen many films worse than its predecessor in the past 10 years.
3:03 AM

Anonymous said…
I had never been interested in the National Treasure series until I realized they're PG, don't rely on potty jokes for their humor and don't show kids being bratty and acting superior to every adult in the film. These movies are perfect for children not old enough to watch PG-13, but who want action and suspense. They have a VERY broad appeal and I wish studios would make more films like them.
10:27 PM