From the Front Row is proud to announce its latest contest in conjunction with Warner Brothers Pictures for their new film The Bucket List (12/25), starring Jack Nicholson and Morgan Freeman, and directed by Rob Reiner. 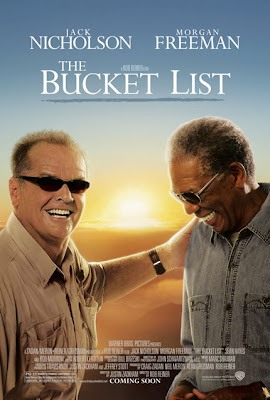 To enter, send in your own "bucket list," that is a list of things you want to do before you "kick the bucket," to contests.fromthefrontrow@gmail.com.
Prizes will be award to the top three most interesting or creative lists. Winners will receive a copy of the film's official one-sheet poster (pictured above) from Warner Bros.

Anonymous said…
most people don't even begin to think along these lines unfortunately or they'd might live their lives more fulfillingly..or not.It;s never too late to dream never to too late to begin work towards that dream..only when you give up,that;s when you really die, long before the physical reality kicks in...enjoy "your" life !!!