It's an odd thing that comes along once in a blue moon at the movies - two movies with almost identical subject matter being released within months of each other. Armageddon and Deep Impact both tackled world-ended asteroids in 1998, Capote and Infamous chronicled the life of Truman Capote within a few months in 2005 and 2006, respectively, and Olympus Has Fallen and White House Down both imagined a terrorist plot to kidnap the President of the United States from the White House in 2013. And in a strange bit of serendipity, 2020 given us two films about teenage girls traveling across the country to get an abortion against their parents wishes in the form of Eliza Hittman's Never Rarely Sometimes Always and Rachel Goldenberg's Unpregnant. 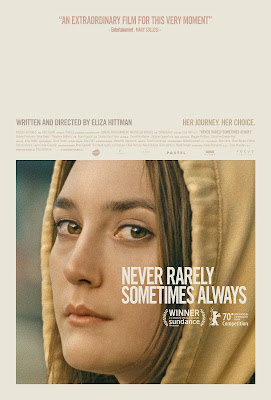 Unlike many of these other films, however, there's such a wide gulf between how they tackle the material that the similarities in their plots haven't drawn such obvious contrasts in the world at large. Almost like Woody Allen's Melinda and Melinda (but better),  Never Rarely Sometimes Always and Unpregnant take both tragic and comedic looks at very similar material. Never Rarely Sometimes Always is the more serious-minded of the two films, examining its protagonist's journey not only as an indictment of the patriarchal structure of the medical system, but of society at large. Autumn (Sidney Flanigan) is a 17-year-old senior in high school who is counting the days until she is able to escape from her unsupportive family. When she discovers she's pregnant, the only place she has to turn is her best friend, Skylar (Talia Ryder). After an unsuccessful trip to her local clinic, where a nurse tries to convince her not to get an abortion by showing her graphic anti-abortion propaganda videos, Autumn and Skylar set out for New York City on what little money they're able to scrape together in order to seek an abortion at the NYC Planned Parenthood clinic.

Hittman (who also directed the 2017 film, Beach Rats), frames the film in such a way that it seemingly strips Autumn of her agency at every turn. The camera lingers on every leering glance from men, quietly observing every unwanted touch (no matter how casual), highlighting the way in which Autumn has very little control over her own body. Forced to seek abortion services hundreds of miles from home, constantly being ogled, groped, or subjected to invasive examinations (both physically and emotionally), the choice in "pro-choice" often seems like an abstract, unattainable concept for Autumn, making the availability of that choice so much more important when she has so little choice over her own body in so many other ways. Flanigan is absolute perfection as Autumn. Her quiet desperation cuts deep, especially in the harrowing scene which gives the film its title, in which her medical counselor asks her a series of questions about her life, slowly peeling back the layers of trauma Autumn has experienced. Autumn leaves many of those questions unanswered, but her silence speaks volumes. Hittman leaves the father's identity out of it - but she tells us all we need to know in those ten heartbreaking minutes. 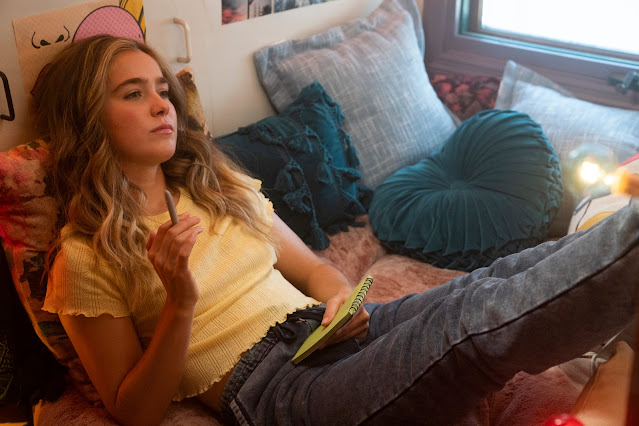 Unpregnant, on the other hand, could not have approached the material more differently. Styled like a odd couple road movie, the film follows 17-year-old Veronica (Haley Lu Richardson), a popular high school senior and upcoming valedictorian, who sets off for a Planned Parenthood with her former childhood friend, Bailey (Barbie Ferreira), a green-haired outcast who dances to the beat of a different drummer. While the plot is similar to Never Rarely Sometimes Always, one major way Unpregnant differs is that it is as much Bailey's journey as it is Veronica's. Richardon is a joy as always, but Ferreira is a revelation, adding layers of depth to what could have easily been a one note sidekick character, and the two make for a fantastic duo that recall the pairings of Superbad and Booksmart. By taking a serious subject and turning it into a broad comedy, it makes the emotional denouement hit even harder. While the film isn't as strong as Never Rarely Sometimes Always, Goldenberg delivers some clever flourishes (including a scene with some anti-abortion activists that plays like something out of a horror film). The two films have nothing to do with each other, besides sharing a similar plot, but they compliment each other well, echoing and reinforcing each others themes.

So why two abortion road trip movies now? Coming near the end of the Trump era, these films portray the assault on abortion rights and women's bodies in general in incisive and memorable ways. That they both do so completely differently but are no less effective for their respective takes is a testament to their unique power. Both humanize the act of abortion, examining the difficult decision making process that it involves, while acknowledging that the process has been made so much harder by the increasingly draconian policies of the last four years (and beyond). What makes Never Rarely Sometimes Always especially chilling is the way in which Hittman suggests that this isn't just about anti-abortion policy, but about an objectification and degradation of women in general. It's a bleak, haunting tale (at times even recalling Cristian Mungiu's 4 Months, 3 Weeks, and 2 Days), for which Unpregnant offers a more playful light at the end of the tunnel. Both offer singular and essential perspectives into one of the most contentious issues of our time.