Not content with delivering one of the best queer love stories of the 21st century in God's Own Country (2017), actor/writer/director Francis Lee has returned with another haunting tale of gay lovers in Ammonite, starring Kate Winslet and Saorise Ronan as 19th century women whose love for each other awakens a spark within them they didn't know they had. 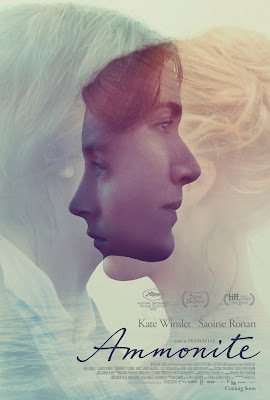 Winslet stars as Mary Anning, a real life paleontologist who was considered by many scholars to be one of the finest fossil collectors who ever lived - spending her days on the beaches of Lyme, England collecting remnants of ancient sea creatures who lived in the area millions of years before, her incredible discoveries often credited to her male contemporaries. Winslet's Mary is insular, quiet, and often stand-offish, far more comfortable amongst the fossils than among the living. Ronan plays Charlotte Murchison, the wife of a wealthy amateur fossil collector who comes to Lyme on doctor's orders to cure her "melancholia." The cure, it turns out, isn't the sea water but Mary; and the two forge a tentative but passionate connection - bridging Charlotte's depression and Mary's anti-social isolation. But the two are ultimately on different paths - rather than be torn apart by societal convention as one may expect in a lesbian romance set in the 1840s, the divide between them is their disparate life goals. Mary's true love is her work, the ancient creatures buried in the mud by the sea, while Mary desperately seeks a lifelong companion in London to rescue her from her lobeless marriage, and even their passion may not be strong enough to bridge the gap.

While God's Own Country was notable for being a rare gay romance that doesn't end in tragedy and heartbreak, Ammonite is somewhat more ambiguous. Ammonite certainly hasn't enjoyed the same rapturous critical reception as God's Own Country, but I found it to be just as aching a tale of love between two people who can't quiet articulate their own feelings. This is about a fleeting connection, a brief and powerful spark, that you can't make work. The gulf is too wide, two people who want different things heading in opposite directions who are what each other needs for a very limited time. Mary and Charlotte are not not soulmates, at least not in the conventional "meant to be" sense. Maybe they could have been in another time if circumstances were different; and therein lies the film's inherent tragedy. This isn't about two women torn apart by society, they're torn apart by their own inability to communicate.

The film has received many comparisons to Céline Sciamma's Portrait of a Lady on Fire, due to being a period romance about two women falling in love by the sea. But it's almost not fair to compare them, because they're very different films with only surface level similarities, and there's something about the unspoken pain lingering beneath the surface of Ammonite that hits even harder than Sciamma's critical darling.  Much of this is due to Winslet's searing performance. She's a woman who could never really be herself, spending years pursuing a singular passion for which she isn't given credit because of her gender. There's so much bottled up inside and you can see it in her eyes. It's one of the finest performances of her career; insular, thorny, wholly unglamorous and yet poignantly realized at every turn. The score by Dustin O'Halloran and Volker Bertelmann is also one of the year's most heartfelt works. You don't hear the first hesitant notes until the first time Winslet and Ronan are alone and then it's just so heartbreaking, two women unseen by those around them who at last see something in each other that no one else can. Yet what makes the film so powerful is that it acknowledges that even that may not be enough with which to build a life.

Lee has a nearly unparalleled eye for finding beauty and pain in the spaces between words. There's something achingly liminal about his cinema, where the emotions exist in the in-between spaces, between words and glances, never fully expressed in words but keenly felt just the same. Ammonite is a deeply beautiful film, economical in its storytelling and yet filled with a boundless sense of emotional depth. It explores so much with so little, where two lovers manage to plug small holes in each other's hearts but can't quite stop the bleeding on their own. It's an altogether astonishing achievement.