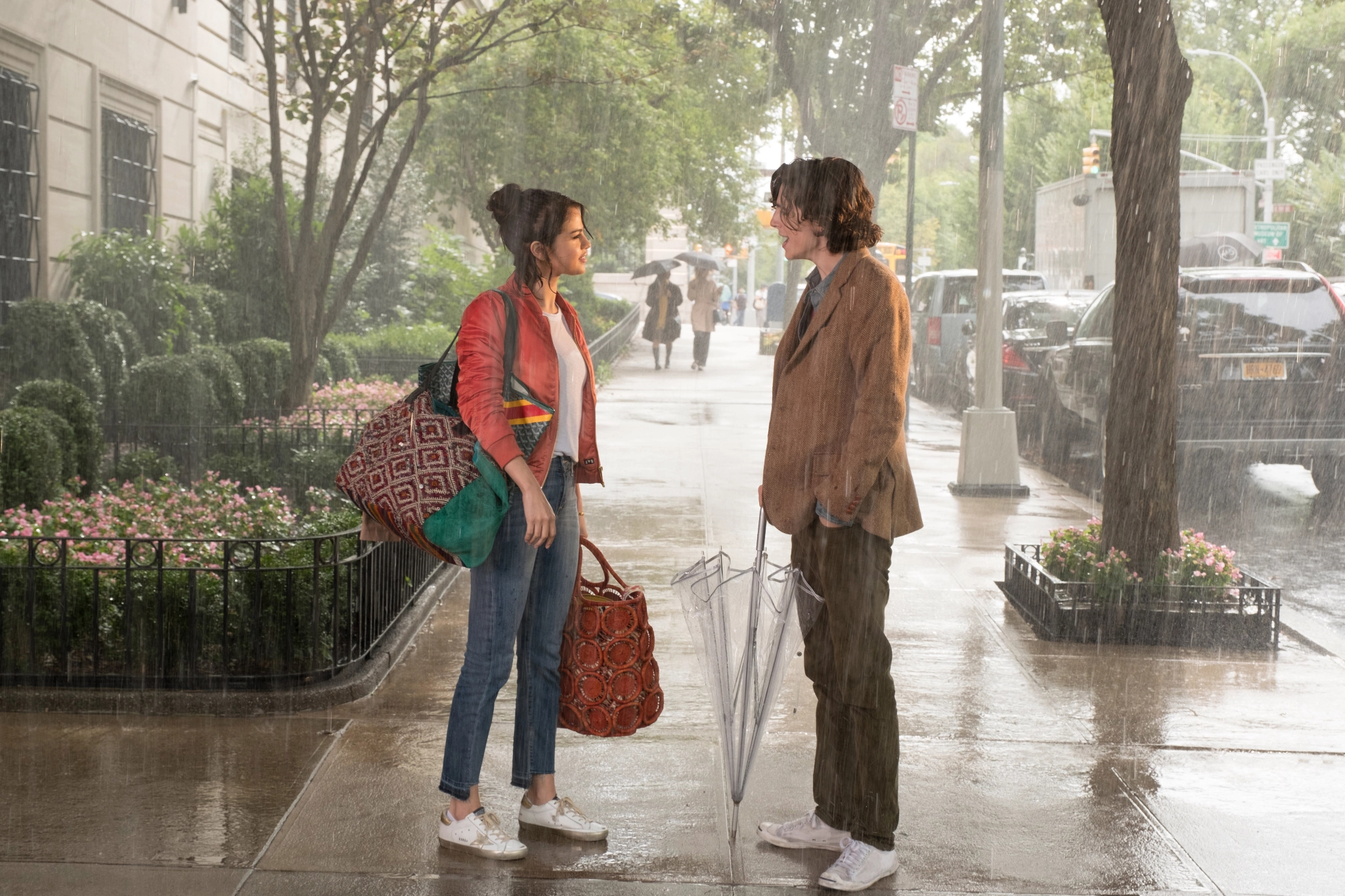 If Woody Allen's last film, Wonder Wheel (2017), was an act of ham-fisted self-defense for the octogenarian filmmaker, then A Rainy Day in New York, (which has been in a state of distribution limbo in the United States since Allen was dropped from his deal with Amazon last year) feels something akin to self-reflection for the famously (infamously?) insular director. Not in regards to the accusations leveled against him, of course, you won't find Allen looking that deep here. But there's something decidedly introspective about A Rainy Day in New York that is hard to shake. 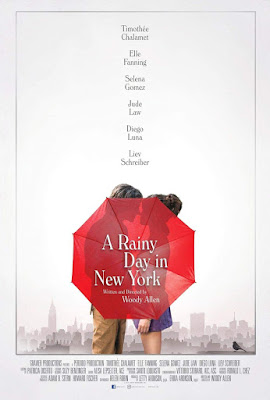 Set on a rainy day in the eponymous city, the film stars Timothée Chalamet (serving as the Allen avatar) as the hilariously named Gatsby Welles, a somewhat self absorbed college student, and Elle Fanning as Ashleigh, his plucky girlfriend who dreams of being a journalist. On a day out in the city, Ashleigh has an interview scheduled with notoriously reclusive filmmaker Roland Pollard (Liev Schrieber), leaving Gatsby to wander around the city, where he encounters Chan (Selena Gomez) and old friend, as she's shooting a student film. Taken in by Ashleigh's guilelessness, Roland invites her to an advance screening of his hotly anticipated new film (which he hates). As Gatsby keeps trying to meet up with Ashleigh, it soon becomes clear that the two of them are on very different paths, in New York as well as in life.

Stylistically, this is very much Allen in his comfort zone. But there's something quite fascinating, indeed almost surreal, about the way Allen's screenplay seems to be in constant tension with the actors on screen. Allen has not adapted his particular style to fit modern twentysomethings, and it's jarring hearing Allen's singularly affected prose coming out of the mouths of college students. They wax poetic about everything Cole Porter to Hitchcock, but that dichotomy between Allen's predilections and the relative youth of the characters are part of what make the film so endearing. It's as if Allen is fully aware of how ridiculous the bourgeois pretensions sound, and he's underscoring them with a kind of winking self-awareness that has been seemingly missing from much of his late period work. Compare Rainy Day to the ponderous Wonder Wheel or the stilted Magic in the Moonlight, and it appears positively fleet-footed.

Like much of Allen's work, A Rainy Day in New York is filled with a nostalgia for a New York that never existed anywhere but in the filmmaker's imagination, a mythical land of art, culture, chance encounters, and romance that has a personality all its own, pushing characters down winding side streets away from the familiar and toward the fantastical, each turn rife with the tingling energy of discovery and possibility. Here, however, Allen seems to admit that it's all a fantasy, a sentimental concoction conjured up in the wistful reveries of an old man pining for the days of his youth. Captured with beguiling elegance by Vittorio Storaro's lovely cinematography (employed to much better use than the beautiful but turgid Wonder Wheel), the film often feels like a daydream. And while it's often familiar, playing on well-worn Allen tropes, the cast (especially Gomez and Cherry Jones, in a small but key role), throw themselves in gamely. There's a certain sense that Allen is looking back now, assessing his career and the themes he's revisited often, but rather than simply retread where's he's already been, he's exploring new avenues, turning down previously unexplored side roads to critique and re-examine his own cinematic pre-occupations. Jones' imperious matriarch with a secret is the tell here - Allen has long poked fun at his own yuppie pretensions, but here he seems to show something that's been missing from his often insular world - empathy. And that makes A Rainy Day in New York something rare and lovely indeed. It may not rank among Allen's finest films, but it plays like a  loving retrospective - no longer content to just play the hits, now he's exploring them in a new and intriguing key.