Despite its evocations of classical Hollywood and its behind-the-scenes narrative of the making of one of the greatest films of all time that (sort of) provides its backbone, David Fincher's MANK often feels more like really expensive fan fiction than a major motion picture. Fincher is a talented stylist, as he has proven time and again in films like Zodiac, Seven, The Curious Case of Benjamin Button, and The Social Network. But rare is the film that truly captures not only the look and feel, but also the spirit of Old Hollywood, and Mank is no exception. 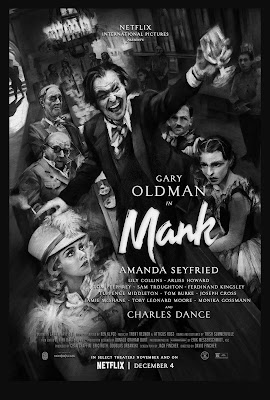 Like Steven Soderbergh's The Good German (which looked to Casablanca for inspiration) before it, Mank's adherence to period detail feels more affected than authentic, with its black and white cinematography, strangely muffled-sounding mono sound (in a way that sounds nothing like the films of the period), and digitally rendered cigarette burns, all in service of a semi-true reverie about screenwriter Herman J. Mankiewicz (Gary Oldman) as he navigates studio and national politics while writing the screenplay to the legendary Citizen Kane. Forget, for a moment, that none of the lead actors are particularly well cast (Charles Dance as William Randolph Hearst and Arliss Howard as Louis B. Mayer are inspired, though), Mank's biggest issue is that there is a strange tension between Fincher's particular style and method and the methods of Classical Hollywood that (visually, at least) he's trying so hard to emulate. It's as if the film is trying to be too many things at once - an E! True Hollywood Story for cinephiles, a cynical Hollywood satire, a Great Man story about the under-appreciated artist behind one of the Great American Films, and an exploration of the unseen politics of Hollywood.

Much of the film involves the 1934 California gubernatorial campaign of socialist Upton Sinclair (Bill Nye), a candidacy that terrified the conservative studio heads and media tycoons like Hearst and Mayer, who concocted backroom deals and unleashed their propaganda arms to cut damaging newsreels to paint Sinclair as an un-American radical in order to damage his campaign. Fincher suggests that much of this was an inspiration for Citizen Kane, even though there's no real evidence to suggest that Mankiewicz was as involved as the film depicts. What's most interesting about this piece of the plot is that, despite Hollywood's rather liberal reputation, Fincher sets out to show that it is in all reality a deeply conservative place, where self-preservation is the priority for wealthy elites. There's something refreshing about Fincher's counter narrative to the modern Republican Party's characterization of Hollywood as a bastion of liberalism when it's really run by corporate capitalists, but the film is too disjointed to really hammer the point home.

In fact, the whole affair comes across as so plastic and disingenuous that it's difficult to really settle into its particular rhythms. It's not film, it's digital. Its sound design is distractingly artificial. And while none of these things would necessarily be problems on their own, taken together, in a film that is meant to be an emulation of a very specific time period and style of filmmaking, they are constantly at war with the modernity of Fincher's aesthetic. Everything about it feels overly precious and fabricated - and while there was certainly sense of heightened reality in studio made pictures of the 1930s and 40s, what's going on here is entirely different, because Mank is pretending to be something that was already decidedly artificial - to paraphrase Tropic Thunder, it's a film playing a film disguised as another film. And none of it works, because unlike many of those studio films of the time period, it lacks soul. Mankiewicz remains (by design) a somewhat obfuscating figure, and the conflict with Orson Wells over credit for Kane seems like an afterthought  to the studio intrigue that supposedly inspired it. Fans of classic Hollywood will certainly finds lots of gripes to be had in its inconsistencies, and the uninitiated will likely be left scratching their heads. This is Fincher indulging in some extremely niche fantasies with some intriguing ideas, but without focus they're just too scattershot to be entirely cohesive - and the result is a film that doesn't quite seem to know what it wants to be or who it is even for.