Set in the not-too-distant future in the wake of a never-named disaster, George Clooney's The Midnight Sky stars Clooney himself as a scientist tasked with remaining behind at an arctic research station in order to warn a crew of astronauts returning from deep space not to come home. Out of communication range for weeks, the spacecraft is returning to earth from a mission to Jupiter's moon Titan, where they were scouting for locations for a potential new safe haven for refugees from our own dying planet. 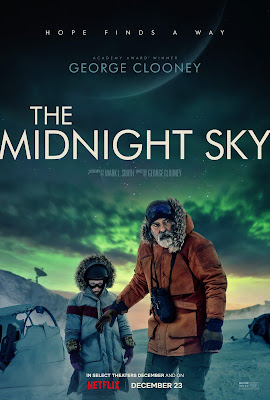 Clooney, the scientist who originally proposed Titan as a potential "new earth," finds himself as the last human remaining on earth's surface after the rest of the survivors have moved underground in a vain attempt to escape the planet's now poisonous atmosphere. Or so he thinks - on one of his many trips around the abandoned base, he discovers a young girl named Iris (Caoilinn Springall) who doesn't speak, but keeps him company on his seemingly doomed mission to save the human race.

The Midnight Sky has a promising and intriguing premise, but it very much wears its inspirations on its sleeve, almost playing like a "greatest hits" of recent science fiction films, channelling everything from Gravity, to High Life, to Arrival, to Passengers, to Ad Astra, to Interstellar, and even The Cloverfield Paradox. The film features some impressive special effects, and a truly lovely score by Alexandre Desplat, but it never shakes the feeling that we've seen all of this done better before. Clooney is a strong lead, completely eschewing his star persona for a weary, haggard performance as a man who feels as though he's done everything he can to save humanity and  has nothing left to give. But the film splits so much of its time between Clooney and the returning space crew that Clooney's story often gets lost, especially in the film's final act which focuses almost exclusively on the space shuttle. Their story is far less interesting, and Clooney's absence in the final stretch leaves a pronounced void.

Clooney tends to be a stronger performer than a filmmaker - and while his insular performance here puts aside his natural charisma in favor of something more insular, his particular star magnetism is the glue that holds the film together. So when he cedes the spotlight to his supporting cast, the film just isn't as interesting. One can't help but wonder if the film would have been a much more unique experience if it had focused solely on Clooney and his young companion rather than splitting its time with the drama on board the returning spacecraft, which feels more like standard sci-fi fare rather than the feature-length "Twilight Zone" vibe given off by Clooney's half of the story. Therein lies the film's biggest issue: its overall lack of cohesion. Its split storyline (on top of flashbacks) make for a somewhat disjointed viewing experience. There are some lovely grace notes, but it never quite rises to the next level. It's certainly an ambitious work as it explores the end of humanity by its own carelessness, but by using its influences as a crutch, The Midnight Sky coasts along through familiar territory without ever really distinguishing itself on its own merits.