Pixar has been around long enough that they've had a few valleys between some of their highest peaks, but there are few studios with quite such a sterling track record. And while their formula has been established for quite sometime, its good to know that they can still surprise and delight so that their films feel as much like acts of discovery as they do familiar comfort food. 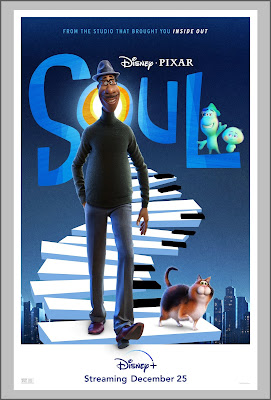 Their latest effort, Soul  directed by Pete Docter, was originally planned as a theatrical release before being relegated to a Disney+ streaming premiere due to the COVID-19 pandemic. And it's a shame that it will never get the theatrical release it deserves, but it is quite frankly one of Pixar's finest achievements, and its most bracingly original offering since 2008's WALL-E. The film centers around a musician named Joe Gardner (Jamie Foxx) who dreams of touring with the biggest names in jazz, but instead finds himself picking up part-time work as a middle school band teacher in between gigs. When the chance of a lifetime finally comes knocking, Joe's life is suddenly cut short, and he finds himself whisked away to the afterlife before he gets his chance to fulfill his dream. Determined to get back into his body, he gets mistaken as a guide by the caretakers of the great beyond, and is assigned a young soul to help them develop the passions that will guide their lives once they're born.

Joe is assigned 22 (Tina Fey), a consistent drop-out whose lack of a spark has flummoxed everyone from Abraham Lincoln to Albert Einstein. With 22 refusing to be born and Joe desperate to return to life, the two form a pact to find a spark for 22 that will be his ticket back to earth. But a mixup leads them both back to earth - with 22 in Joe's body and Joe's soul in the body of a cat, leaving them to find a way to switch back so that Joe can at last achieve his dream of playing on stage with his idol, Dorothea Williams (Angela Bassett).

Soul has been criticized in some circles for its lack of a strong story, but its lightness of plot actually works to its advantage. This isn't Pixar's first foray into the afterlife (Coco went there in 2017) or its first brush with mortality (Up confronted it head on in 2009), but it is perhaps the most existential film they animation house has yet produced. As 22 seeks her spark, and Joe clings to something that he thinks is the meaning of his life, the film examines the simple beauty of life itself. That may be a hard pill to swallow in a year like 2020, but SOUL feels like a balm at the end of a year of almost unending tragedy and pain. It finds beauty in life's smallest moments - in the wind rustling through the trees, in sunlight streaming onto a city sidewalk, in leaves soaring through the air; and it does so in almost avant-garde fashion.

The film's post-modern evocation of the afterlife, set to a nearly transcendent score by Trent Reznor and Atticus Ross and the wistful jazz stylings of Jon Batiste, is unlike anything Pixar has done before - at once clever and subversive, eschewing trappings of specific faiths for something more cosmic and unknowable. But what really sets Soul apart is its dedication to finding beauty, indeed the real spark of life, in life's in-between moments. A more complicated plot would have distracted from its message - and the message here is that one doesn't necessarily have to have a set purpose in order to live a fulfilling life. While most of Pixar's films have had elements meant to appeal to both children and adults, Soul feels like their most grown effort, a bittersweet and contemplative tale of finding one's place in a world that expects you to have everything laid out advance. In that way, it makes an interesting companion piece to Tyler Taormina's Ham on Rye, a film that satirizes society's arbitrary milestones designed to govern the direction of the rest of our lives. And while Soul isn't quite so cynical, it finds a sense of hope, community, and even peace in the unknown, both in this life and the next. Docter has helmed some of Pixar's most emotional and incisive works (Up, Monsters, Inc., Inside Out), and Soul just might be his most penetrating and deeply felt film yet.