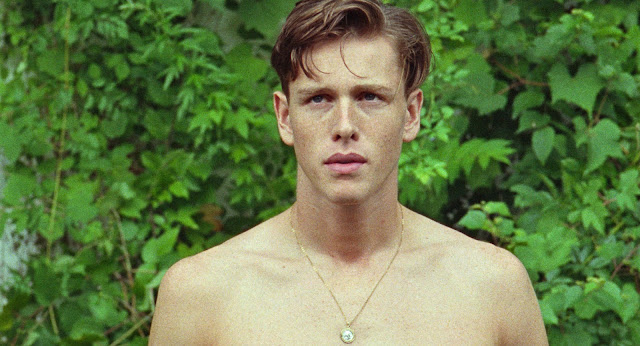 Frankie (Harris Dickinson) is a teenage boy who spends most of his days roaming around the streets of Brooklyn with his coterie of ne'er-do-well friends smoking pot, hanging out at vape shops, and loitering around the local beach front. It's an aimless existence, soaking in the sun and chasing girls down by the pier, taking no responsibility and having not a care in the world.

But Frankie isn't so sure he's interested in girls. At night, when his friends are all gone, he trawls gay cam sites on the internet looking for men. He begins meeting older men for drugs and sex.  When he finally meets a girl he's interested in at the beach, he finds he can't perform in bed. Afraid to reveal his feelings to the world, he instead buries them down deep, leading him down a dark path from which there may be no return. 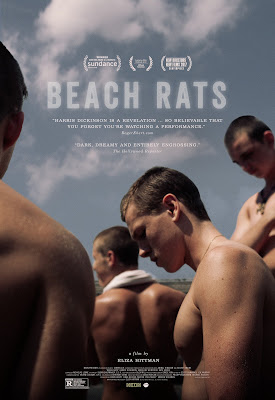 Beach Rats is quite possibly the most authentically queer film of the year. Eliza Hittman has an uncommonly keen eye for the feelings of a young man struggling his sexuality, and the avenues through which he chooses to express it. She explores gay hookup culture without judgement, and even when the film takes a potentially tragic turn, it is the culture of toxic masculinity that is ultimately to blame. Frankie's journey feels wholly authentic, even if some of the plot elements don't really work. Frankie's sick father feels more like a undeveloped plot device than actual character development.

Still, Dickinson's performance is remarkable, it is a turn full of vulnerability masked by teenage bravado. He makes us feel his inner turmoil, and makes the heartache of the closet feel almost palpable. Frankie comes alive in his encounters with other men, and we see what might even be the pangs of first love by the end, at least until Hittman threatens to veer into hoary "kill your gays" territory. Thankfully, she doesn't fully delve into that outmoded trope, instead using it as a moment to explore the devastating effects of Frankie's lies, both to himself and to his friends and family.

I only wish that it had gone deeper. Beach Rats is a film that manages to be both erotic and heart wrenching, an introspective portrait of a young man in transition and learning to be who he truly is. But it never really grapples with the issues it raises in a particularly satisfying way. Unlike, say, Moonlight, which juggled many thorny issues of identity with aplomb, Beach Rats is merely content to observe and report. Even still, Dickinson's powerful performance offers a poignant window into the soul of a boy in the process of becoming a man, but doesn't quite know what that means. And while it may falter as an in-depth character study, as an exploration of a young man's awakening sexuality, it's as evocative as they come.