If 2020 had anything going for it, it was the first year over a decade without a major release from Marvel or DC, but Warner Brothers opted for a last minute theatrical/streaming hybrid Christmas Day release for Patty Jenkins' Wonder Woman 1984, the long awaited follow up to her 2017 hit starring Gal Gadot in the title role. But in true 2020 fashion, it's more akin to a lump of coal in our collective stocking than a shiny new Christmas gift. 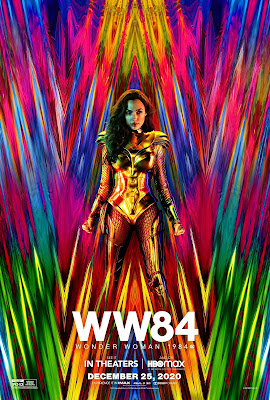 Despite its somewhat weak ending (a popular sentiment echoed by Jenkins herself), the original Wonder Woman remains one of the strongest films in the new post-Dark  Knight DC lineup, so it should come as no surprise that like Icarus, the inevitable sequel flies too close to the sun. Wonder Woman 1984 is an odd bird indeed, somehow too ambitious for its own good and yet remarkably low stakes, despite the usual world-ending premise. The film finds Diana Prince (Gadot) alone, decades after the original, WWI-set film, working at the Smithsonian Institute in Washington DC. It is there where she encounters a strange stone, brought in by the FBI for identification after an attempted jewelry heist foiled by Wonder Woman at a local mall (it's the 80s - mall scenes are obligatory).

The stone, it turns out, is some sort of ancient wishing stone (are we really still doing magic stones?) that grants any wish made while touching it - but for a price. Diana wishes to have her lover, Steve (Chris Pine), back; and he returns in someone else's body. Her nerdy coworker, Barbara (Kristen Wiig) wishes to be like Diana, and suddenly finds herself with superpowers. But a ne'er do well wannabe oil magnate (Pedro Pascal), whose image of wealth and success isn't what it appears, is desperately searching for the stone, and he will do anything to get it and make all his dreams come true, by taking what he wants from everyone else.

It's a rather convoluted premise, and the weak script does it no favors by pool explaining the logistics and mythology behind it, none of which are particularly clear or consistent. This has the unfortunate side-effect of making the entire conflict borderline incomprehensible, with the motivations of the villains frustratingly amorphous. At 151 minutes, the already thin plot is stretched past its breaking point with seemingly endless action set pieces that add little to the story and almost seem half-heartedly constructed, featuring lots of quick cuts but very little stakes or suspense.

It's not a total loss; Hans Zimmer's score fires on all cylinders, expanding beyond the now famous Wonder Woman theme form his Batman v. Superman score in ways the film never really earns. Wiig is also terrific as the mousy scientist turned sultry villain, even if the role is painfully underwritten. That's really the film's biggest weakness, with so much going on, the script simply just does not step yup the plate, falling back on lackluster dialogue that's filled with lame platitudes about truth and love that resolves everything far too easily. They really expect us to believe, after the last four years, that all it takes to stop someone from making selfish and destructive decisions is to...ask them not to? Jenkins is a strong filmmaker, but Wonder Woman 1984 is a mess, a muddled and ponderous blockbuster that is somehow both overstuffed and undercooked that leaves the audience wanting more because it never really got anything in the first place.