In the wake of the #MeToo movement, women everywhere have felt empowered to tell their stories of abuse in ways that signal to other survivors of sexual harassment and abuse that they are not alone. While this has doubtlessly been a difficult process for many survivors, it would be difficult to argue that the #MeToo movement hasn't been a net positive for the country, as abusers everywhere are finally being confronted and facing justice. 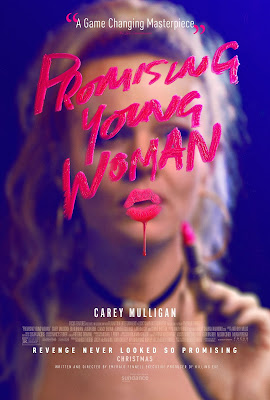 Filmmakers have been grappling with the movement in their own ways as well, and 2020 has been an especially strong year for women filmmakers to tell their stories. Kitty Green's The Assistant, Eliza Hittman's Never Rarely Sometimes Always, Maïmouna Doucouré's Cuties, and now Emerald Fennell's Promising Young Woman, have all dealt with what it means and how it feels to be a woman in their own unique ways. Promising Young Woman stands out by using the trappings of a genre film to tell the story of a woman named Cassie (Carrie Mulligan) seeking revenge on the men who once sexually assaulted her friend at a party in college many years ago. She has weaponized her trauma by pretending to be drunk at bars where she is picked up by strange men with the intention of taking advantage of her, only to "snap out of it" right before they do the deed in order to teach them a lesson they won't soon forget. It's an ingenious concept, made even more so by Mulligan's barnstorming, multi-layered performance, which casts her as a lone warrior taking on rape culture almost singlehandedly.

There is so much to like here - the way in which Fennell carefully avoids turning Cassie into an abuser herself - even as she delivers devastating blows, often targeting bystanders who  did nothing or looked the other way, but never actually allowing them to become victims themselves. She just wants to give them a taste of their trauma her friend endured. In that regard, she's as much a teacher as she is a warrior, brilliantly illustrating the pain and uncertainty felt by victims of rape and sexual assault. It's an often deeply uncomfortable film, dealing frankly with incredibly dark emotional material, and Fennell pulls no punches in her depiction of repressed trauma made manifest, creating an almost unbearable sense of dread where any character is a potential source of abuse, whether it be sexual, physical, emotional, or mental.

Where the film falters is in its ending, which has been the subject of much online debate even among the film's most ardent fans, which seemingly upends everything we've seen running up to it. Fennell does such a fantastic job of illustrating how even those who were not directly involved with the rape were still complicit in their silence, their laughter, or their obstruction of justice in order to protect the reputation and careers of the men involved, but the film undercuts some of its own power by suggesting that the only way to defeat rape culture is to become a victim yourself. That the film's hero also becomes a victim in the end feels somehow incongruous to what we've seen leading up to it. Sure, she reclaims her power and agency even in victimhood, which is an important thing to note, but there's something strangely contrived about the final scene, which is satisfying on a surface-level if not necessarily a narrative one. It leaves the audience with some extremely uncomfortable questions - as great filmmaking often does. But after such a thorny film, its "happy" conclusion seems somehow hollow. Perhaps that's how the MeToo movement feels in the wake of centuries worth of unchallenged Rape culture, but it's too neat a bow on an otherwise prickly, rage filled film. Promising Young Woman is a jagged little pill, to be sure, and while I'm not convinced it adds up to a fully cohesive thesis, it is clear is that Emerald Fennell is an extremely promising young talent.